Excerpt From RENOVATING THE RELATIONSHIP by Katherine Kingston 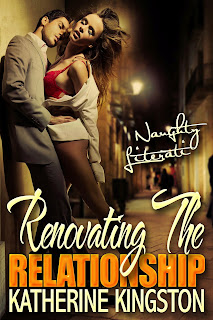 Blurb:
Dani and Brad’s relationship ended years ago when he couldn’t give her what she needed. This time Brad thinks he’s found a way to provide it, but Dani might not agree when she realizes what he plans.
Genre/theme: Contemporary

Brad Carpenter entered the office and approached his employer slowly, trying to gauge his mood before he spoke. He liked Andrew Robertson, who preferred to be called Drew, but the younger man had been through a lot. When his scars ached or the memories overtook him, he could be unpredictable.

It looked like today might be one of his better days, however. Drew smiled when he looked up and saw Brad, and he nodded to a chair.

Drew had hired Brad six months previously to renovate the gardens of the mansion. In the time since, a close friendship had grown between them, despite the difference in their ages and circumstances.

Brad cleared his throat after he sat. “Um… I have…” He sighed. “This is hard.”

Drew’s eyes widened. “Hell. You’re not quitting on me, are you? I know the grounds need a lot of work yet, but I thought you were excited about the challenge.”

“No! Not quitting. I just… I think I might have an answer to several of our problems.”

Drew’s sandy eyebrows rose. “Which ones?”

“The house, the decorator, and maybe…” Brad felt the heat rising in his cheeks. “A personal issue.”

A spark of laughter lit Drew’s light eyes. “Yours or mine?”

“Mine. Mostly.” Brad locked his fingers together and drew a breath before launching into the story. “I heard from my cousin Cara that an old friend could use a change. Dani’s husband died a few years ago, leaving her with two nearly grown kids and a mountain of medical bills. She’s working an office job, but my cousin says Dani isn’t happy with it. Her youngest has just left for college and she’s planning to the sell the house and move into an apartment. She’s not real happy about that either, apparently, but feels like she has no choice.”

“You think I should offer her a job?”

Brad nodded. “She’s really good at organizing things. She could help you sort out getting the house renovated and dealing with the decorators and all those kinds of things.”

“Can she cook?” A definite strain of interest underlay the question.

Drew huffed a quick chuckle. “How well do you know her?”

“We grew up in the same town, went to the same high school and local college. We dated for a while before she married Tom. We’ve kept in touch off and on over the years. She’s a good person. Raised a couple of great kids. One’s a sophomore at N.C. State, the other just started at Appalachian. I think they both got some scholarship money, but I imagine it’s still increasing the financial pressure on her.”

Drew eyed him speculatively for a moment. “You want another chance with her?”
Brad chewed his lip and sought for an honest answer. “Maybe, but it would be complicated. I don’t even know if it’s possible. It’s more that I think she could use our help and she could be a lot of help in return.”

“What are the complications?” Drew asked. For a guy who was intensely private himself, he didn’t mind asking personal questions.

Brad nodded. “I don’t get it, but I’ve done some reading on it and it seems like some people just are that way. But I don’t mean to imply that you’d need to do anything or even that she would want you to. I’m just explaining why the two of us together don’t really work.”

Drew’s expression turned wary. “But maybe with a third you could?”

“I don’t know. And that’s not why I brought it up. Maybe down the road, we could work something out, if everyone… But for now, I’m just saying she could be what you need to manage this place. And cook for us.” To lighten the atmosphere, he added, “Neither of us is very good at it.”

“You’re not kidding,” Drew shot back. “That stew last night was awful. You may be a genius with plants in the ground, but not in the crockpot.” He tapped his fingers on his desk. “I’ll ask her to come and talk to me about it. Can I tell her you recommended her for the job?”

“Tell her an old friend did. That should make her curious enough to ensure she’ll come and talk to you about it.”