I’m sure you’ve read about writer’s block and how authors try to get around it before. But sometimes trouble comes unexpectedly.

As most readers will have worked out from my books, I love summer, the hot weather, the beach, and walking through national parks. For some years I’ve enjoyed swimming at a local, large Aquatic Center. One day as I was swimming up and down in my lane (the slow lane sadly, not the fast lane, or even the medium lane), I started thinking that an Aquatic Center would be a mighty fine place to meet Mr. Right. After all, there are plenty of brawny, naked chests, quite a lot of young, good-looking, ultra-fit life guards, and lots of sweaty, delicious muscles in the gym. The only surprising part of my decision was that I hadn’t thought of doing it long ago.

So I started writing the “Wet and Willing” series right there and then (in my head) as I swam. I expected it to be a paranormal series, as I’d been writing a lot of paranormal stories at that time, but the characters stayed firmly fixed in the here and now, showing no unusual abilities, remaining stolidly contemporary. Hey, that’s okay. Half the time I just take dictation from demanding characters anyway.

But then the unthinkable happened. The management of the Aquatic Center announced it was closing so they could undertake a major upgrade, and all the members had to find somewhere else to exercise for the eighteen months construction would take.

Fortunately for my peace of mind, we were given passes to another Aquatic Center, a little farther away, but just as big and exciting. So the series, “Wet and Willing” was written.

Each of these books is a complete story in itself, but previous characters return for cameo appearances in later books.

And I’m still there every week, slowly making my way up and down the slow lane, getting inspiration from hunky life guards, and fit exercising men.

The “Wet and Willing” series is MMF ménage and available from http://www.bookstrand.com/berengaria-brown 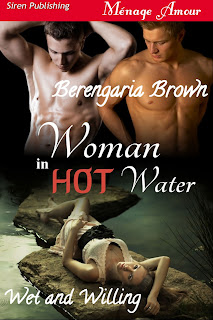 “Jewel’s Ménage Christmas” is another one of my MMF menage stories. It’s in the “Naughty List" boxed set.

Jewel, Donovan, and Oscar live together but the excitement has gone out of their relationship. She makes holiday plans to spice things up. Jewel's thought of everything, but will Donovan and Oscar rise to the challenge? 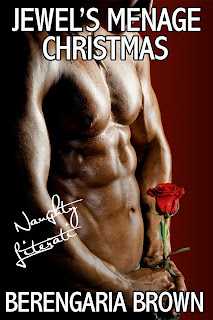 PG excerpt: “Jewel’s Menage Christmas”:
Jewel never thought she'd have to say it, but frankly, her ménage relationship with Donovan and Oscar had become boring, predictable, and stale. The three of them acted more like old married fifty-somethings than three trendy, young, ménage-sharing twenty-somethings.
They should be eager to jump into bed together or fuck up against the wall, filled with raw passion for each other. Instead, Oscar was so tired after work he fell asleep on the sofa in front of the television, while Donovan sat at the table surrounded by a mountain of paperwork he'd brought home from the office. At night, in their apartment, instead of screams of passion, there were soft snores from Oscar, and groans of frustration from Donovan as he hunted for missing pieces of data.
"We're all still young. We should be in bed having sex," she said aloud in the living room.
Neither man paid any attention to her.
She had the feeling that even if she stripped off, Oscar wouldn't wake up, and Donovan wouldn't notice unless she started dancing on the table between him and his spreadsheets.
"You're not listening, are you? I may as well be invisible!"
No response.
The way Jewel saw it, she had two options -- find herself a new relationship or kick the men into action and reignite some passion in their existing threesome. Jewel slitted her eyes and gazed critically at the men. Donovan had short, blond hair, deep blue eyes, was a fraction over six feet tall, and looked like a muscular Viking. Under that boring, plain, navy blue sweater, he had the most intricate tribal tattoo across his right upper arm. He also had a large cock that he knew how to use to hit her just right to bring her to a screaming orgasm. Not that they'd done that too often lately.
Oscar slumped on the sofa, his red head thrown back against the top of it. He had the very fair skin and pale blue-gray eyes common to redheads. He also had a lean, lithe, runner's build, making him appear taller than his six-foot-even height. His cock was a mighty fine piece of equipment, too. Oscar and Donovan were both bisexual, comfortable with fucking each other, or fucking her, or fucking as a threesome.
It wouldn't even be so bad if the men were fucking like bunnies. At least I could watch them. But lately, no one here is getting any!

Posted by Berengaria Brown at 1:14 AM