So neglecting the essentials of good writing might get an aspiring author a sale to Penthouse Variations letters but never a book contract or even an indie-published novel with decent sales—unless you offer it for free. A freebie here and there may stimulate sales of your other books, and that’s good, but eventually a writer must gain the skills s/he needs to garner paid sales, if s/he aspires to be a professional.

What are the essentials of good erotica? They’re the same as the essentials of any good story. In brief: likable characters who resolve interesting conflicts in a setting that heightens the emotional content of the story.

But their conflicts aren’t. In her twenties, Lisa has it all: a cushy job at an island resort where everyone bows to her will, plus wealth and beauty. Nevertheless, she feels separated from reality and can’t understand why she’s drawn to vanilla sex and normalcy. Thrill-seeking photojournalist Elliott desires to explore his darkest sexual self for the undeniable danger enslavement presents.

Plotting and Planning, that the writer must know his or her characters down to their souls. It’s clear that Rice knows Lisa and Elliott, and by the end of the book, we know them almost as deeply.

Step one is creating likable characters with interesting conflicts. Those conflicts have to be the sort that doesn’t keep them apart physically, so they’re less romantic or external conflicts than they are internal conflicts. Let’s look at Lisa again. Her conflict isn’t with Elliott—it’s with herself. She has everything but can’t understand her discontent. This conflict pops up frequently in modern literature. As our lives have become more comfortable, fewer external conflicts, such as getting our next meal, are the subject of books. When writers examine modern life, they often analyze our dissatisfaction in the midst of plenty. In fact, one of Freud’s most famous works is Civilization and its Discontents.

Step two is getting your likable but conflicted characters naked as soon as possible and as frequently as possible within the limits of the story. In Exit to Eden, Rice does this via the setting as well as the characters. The setting allows Lisa to choose and use Elliott as her personal sex slave. This takes place early in the book and is preceded by several sensual scenes, including the unloading of the new batch of naked slaves delivered to the resort she runs. And it’s followed by many erotic scenes as the characters’ pasts are shown to the reader and the course of their romance is related.

So, in order to load erotica with a lot of sex, start with a sexy premise, which will lead naturally to a lot of sex-filled scenes, without the lovemaking seeming forced or the sex shoehorned into the book just to give the reader a chance to get off or, worse, to increase the word count.

Another tactic is to begin a story in the midst of a relationship. Here’s the beginning of one of my short stories, Gypsy Witch: 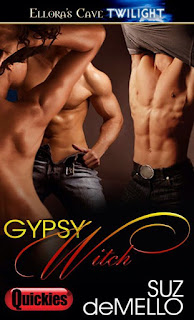 Ben propped himself up on his elbows to better see the naked woman beneath him. Sheened with sweat, Elena’s lush curves glowed in the reddish half-light of her bedroom, curtained in exotically patterned swaths of gauze and silk. A curl of smoke from a lit incense stick scented the air with sandalwood. Otherworldly New Age music flowed out of a boombox in the corner, irritating the hell out of him.

Not only did I start off the story with a bang (pun intended) but there’s quite a bit of characterization and even a little conflict—and this is only the first paragraph. We see that Ben is very “feet-on-the-ground” while Elena, his lover, is exotic and New-Agey. So character is described, setting is related and the romantic conflict is shown.

Step three is developing the plot so that the characters’ romantic relationship grows along with their sex life. Sex may be an everyday occurrence, and even mundane to many, but if you’re a character in a book, having sex will change your relationship. If it doesn’t, it doesn’t belong in the book. Nothing belongs in your story except events that move the tale along. The entire purpose of a romance—which is usually the fiction genre that erotica falls into—is to show growth and change in the characters as they grapple with their conflicts and gain their happily-ever-after, or at least, happy-for -right-now love. If you’re at all tuned into the basics of plot, you’ll place those life-changing events right where they should be—at turning points in the story or perhaps at the midpoint.

Here’s where you can find the books I wrote that are referenced in this blog:

Plotting and Planning, included in About Writing: 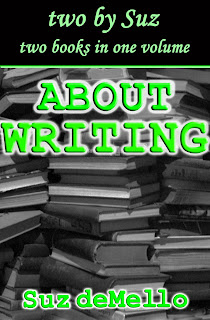 Best-selling, award-winning author Suz deMello, a.k.a Sue Swift, has written seventeen romance novels in several subgenres, including erotica, comedy, historical, paranormal, mystery and suspense, plus a number of short stories and non-fiction articles on writing. A freelance editor, she’s held the positions of managing editor and senior editor, working for such firms as Totally Bound and Ai Press. She also takes private clients.

Her books have been favorably reviewed in Publishers Weekly, Kirkus and Booklist, won a contest or two, attained the finals of the RITA and hit several bestseller lists.

A former trial attorney, her passion is world travel. She’s left the US over a dozen times, including lengthy stints working overseas. She’s now writing a vampire tale and planning her next trip.