Like most kids, I hated school. Mathematics was the bane of my existence...and still is. I don't have the right-sided brain for math. I especially began to hate it when my math teacher Mrs. Doris Hockersmith decided it would be a really cool idea to have math races on the blackboard. Ever engage in that particular blood sport?  It is a grueling, humiliating battle waged by two contestants who stand side by side at the chalkboard with chalk in hand. On the dark green surface of the newly-clean chalkboard are two identical rows of numbers. Those number could be addition or subtraction or division or....WORSE YET!...a combination of all three.  Contestants stand braced to go at it. Teacher yells GO and you race to see who will get to the end of the numbers...correctly...before the other hapless, meandering student.  I never won and when I had to race against the reigning champion Zella Griffin, I was especially humiliated by the contest. She'd be at the end before I got 1/4 of the way through my row of numbers. I really did not like Zella Griffin or her sister Cupie. 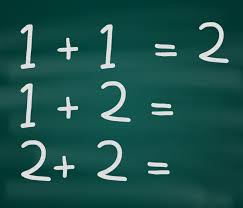 Have I said just how much I hate math?

As much as I hated math, I loved English. That was my favorite...well, until I had to diagram sentences and that was a chore I loathed. But creative writing?  Reading books? Learning poetry?  Now that was the highlight of my day.  I may not remember what a gerund is or what it does but I remember the poem Little Boy Blue made me cry. I may not remember what other strange-sounding parts of grammar are but I remember...in its entirety...the Alfred E. Noyes poem The Highwayman. (I once won a talent contest by dramatically reciting the poem while dressed as Bess, the landlord's black-eyed daughter.) 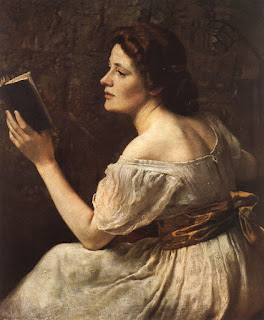 The Highwayman poem captured my imagination as nothing ever had before. I had no idea at the ripe old age of twelve what a romance novel was. I'd never read one and my mother only read westerns and Romance magazine.  My father wasn't a reader at all...not even the newspaper. The books I had discovered were science fiction and horror and that was what I devoured until that poem began to haunt my dreams.  I fantasized about the mysterious highwayman and his lady Bess. The tale intrigued me...even if I had no idea what that word meant back then.  It just wouldn't leave me be. It stuck in my mind like a melted gummy bear and I couldn't shake it loose. I do believe the poem was what made me want to put my own tales to paper...which I began to do a few months after becoming fascinated by the highwayman.

There have been a couple of really dismal movies based on the poem that were made back in the last century. Nothing to write home about, trust me. A few books were based loosely on the poem. When e-books began to get a toehold, some ladies wrote their version of the tale but none of them really struck a chord with me.  So I decided to write my own.

When I finally got around to it...simply because of two actors who bear a remarkable resemblance to one another...I didn't really see it as an entire book. I wrote it as a dream sequence after the heroine in my novel UNDER THE MAYHAW TREE 'saw' a movie version of the poem starring Colin Farrell and since the hero in the book looked a lot like Colin, she began calling him Highwayman. My editor very gently told me that she would LOVE to see an entire book written from that dream sequence. She all but demanded it. She liked the name I gave my hero...Declan...and she liked that there were two women vying for the heart of the notorious thief. She encouraged me to write the book and I did. It turned out to be one of those books that writes itself. My fingers couldn't fly fast enough over the keyboard and I fell in love even more with the Highwayman. When I gave it some very unusual twists, I could hear my editor squeeing all the way from California.

If you were as big a fan of the poem as I was back in the day, I hope you'll give MOONLIGHT RIDER a try. If you've never read the poem, look it up. Romance fans will see why I loved the poem so dearly.  If you're curious to know who I saw as Declan, it is Newfoundland actor Allan Hawco (who does look a heck of a lot like Colin Farrell).  Kerry Washington is Bess and Scarlet Johansson is Lady Althea.  Tymothy Olliphant is Jack, Declan's hilarious best friend. 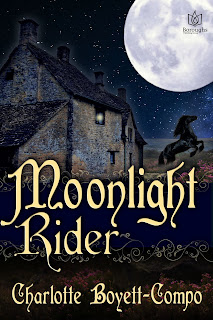 Read the synopsis, an excerpt and the reviews at www.windlegends.org/moonlightrider.htm

Posted by Charlee Compo at 8:51 AM