Excerpt from The Woodsman by Belle Scarlett 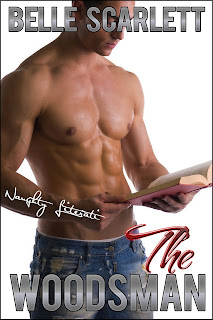 Blurb:
Once upon a time in the Enchanted Forest where cursed beings are consigned until the spells that bind them are broken… What if the Big Bad Wolf was the good guy?
*This title, previously published as The Woodsman, has been revised and reedited.*


Here's a thrilling, chilling tasty bite of Belle Scarlett's spicy wolf-shifter fairytale, The Woodsman, inside Naughty Novellas: Seven Sensuous Romances, The Naughty Literati's largest boxed-set to date~
Excerpt:
Once upon a moonlit October night in the Enchanted Forest, where cursed beings are consigned until the spells that bind them are broken…

Lady Lily Rouge’s musings were broken when her swaying carriage slowed and came to a dead halt in the road. Lily opened the door and leaned out.

No answer from the front of the carriage.

A chilling howl sounded, mere feet away in the darkness. Lily instinctively recognized it for what it was, a demand for surrender, ownership…possession. In answer, she felt a gush of fresh moisture cream the tops of her inner thighs. What was happening to her?

Then a man screamed.

Lily stared hard through the growing fog and watched in shock as her portly driver’s shape disappeared on foot through the marshy landscape dotted by eerie will- o’-wisps.

An enormous black creature chased him, running on all fours.

She tried wildly to recall the old, superstitious stories about this wood. Something about a huge wolf, dark as the night, who walked as a man in daylight. He was consigned by a mystical something or other to reside inside an Enchanted Forest because he committed some infraction until…until… Lily could recall no more.

She shifted uneasily. Well, she could not sit here forever. The beast could return at any moment and then she would be trapped inside for who knew how long. She would have to find a way out of this damnable wood herself!

In a trice, she struggled out of her doublet, bodice, cumbersome skirts, bum roll and petticoats. She wrapped herself once more in the warm, red cloak and raised the deep hood over her handsomely dressed auburn curls.

Lily returned her attention to the carriage window and scanned the inhospitable night. Nothing moved outside. Now was her chance.

She took a deep breath and tried to open the carriage door. Fear made her stiff, chilled fingers clumsy as she fumbled with the handle. She needed something to stop her hands from shaking. She glanced around at the stacked pieces of baggage and plucked a flask of wine she spied poking through the opening of a lidded, woven basket Cook had packed for her journey.

Undoing the stopper, she tipped a healthy swallow down her throat. Dull warmth spread through her and burned her cheeks. All at once, she could not quite recall why she had been so frightened a moment ago. Tucking her liquid courage back into the food hamper that dangled from her elbow, Lily muttered an unladylike “Merde” and alighted from the carriage.

Her red cloak swirled around her ankles as she struggled forward and began to unharness Buttercup and Lucifer. Lucifer was the swifter mount and Lily could only hope poor Buttercup could evade the ravening wolf until she could return with a hunting party. A large one, she thought maliciously.
“Then I shall have the last laugh on that filthy brute. I will not be intimidated by a simple-minded wild beast!” she announced grandly to the night while her fingers worked the leather straps.

The sullen fog refused to answer.

For good measure, she added a deliciously forbidden, “Bollocks to wolves!”

The carriage suddenly swayed, as though jolted by a mild wind. Both horses beside her suddenly whinnied, straining their harnesses.

Lily felt a chill go through her that had nothing to do with the temperature.

Slowly turning her head, she looked up at the coachman’s seat. Staring down at her with mesmerizing eyes the color of a robin’s egg was the biggest, blackest wolf that Lily ever imagined could exist.
Lily and the huge wolf regarded one another for a timeless moment. The wolf quirked its head to one side and looked her up and down. It was almost as though it was taken aback by the sight of her, poised for flight, wearing only a bright cloak that parted down the front to reveal her snug bustier and lacy pantalettes that lovingly hugged the curve of her hip and legs. Its red tongue panted at the sight of her luscious frame.

Lily glared up at the wolf and edged back a step. Then two. Then three. Maybe she could make a run for it.

As though reading her thoughts, the wolf leapt from the coachman’s seat and stalked toward her, stopping only a couple of paces away. It had situated itself between her and the horses, and seemed to be waiting for her next move.

“Shoo!” She tried waving it away with one hand. “Scat! Begone! Go away! Bad dog!”

The wolf replied by sitting back on its haunches and parting its jaws in a feral grin. Had Lily not known such a thing to be beyond the realm of possibility, she would have sworn the animal was amused by her feeble attempts to drive it off and was in fact laughing at her!

She tried to edge carefully around the black beast toward Lucifer. A deep, warning growl rumbled from the wolf’s throat. Lily froze, poised for flight but not daring to move for a full minute. Then she began edging backward.

As she stepped off the narrow, rutted road, her slippers sank into the muck up to her ankles, but she never took her eyes off the impressive creature that impassively watched her retreat.

When she was a few yards away, she turned and fled, dashing as fast as she could across the uneven ground. She ran on and on, without hearing any sound except for the pounding of her own heart and the flap-flap of her red cloak that billowed behind her.

Suddenly, Lily found her way barred by a second, smaller wolf, this one white. A she-wolf who bristled with a malevolent aggression that was focused intently on Lily. Lily halted in her tracks, breathing hard from the sense she was somehow the sole center of the she-wolf’s hatred. But how could that be? She had done nothing to this animal to warrant such fury.

The white wolf advanced, snarling viciously. Lily cringed and waited for the attack she knew would come. The she-wolf sprang. Lily screamed.

A blur of black fur hurtled into the clearing and threw itself onto the white wolf, broadsiding her in mid-leap. The two beasts crashed as one to the ground. The she-wolf felt the sting of the black wolf’s teeth and bounded off through the dense trees with a yelp.

“This cannot be happening.” Lily was not aware she had gasped her thought aloud until the black wolf swung his great head in her direction. His intent gaze was once more upon her. He prowled toward Lily. She closed her eyes tightly, waiting for the first bite.