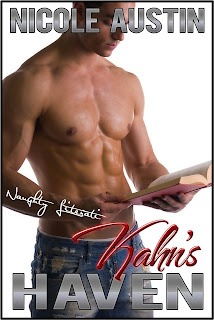 Blurb:
Anita Bennett’s fight to solve the mystery of eight lost days leads to a hunt for the jaguar-man who haunts her fractured memories. Her plan is simple—find and seduce him. What she didn’t anticipate is his resistance.
*This title, previously published as Rakahnja’s Haven, has been revised and reedited.*


Okay, get back on track. She was alone in an unknown location, had a twisted ankle, short-term memory loss, dehydration and no clean water supply. In most cases she’d advise the person to stay put and wait for rescuers. With no way to make contact she was well and truly screwed. And not in a fun, orgasm on the horizon kind of way.


She had one option—get moving and save herself. So she started walking.


“I’m going to die…alone…in the mountains.”


That was the harsh truth of her situation. Ready for it or not, short of a miracle, she did not have much time remaining.


Time. The word no longer held any true meaning as she wandered aimlessly through the wilderness looking for anything recognizable. How long had she been walking? Turning in a circle she didn’t see the incline anymore.

Feeling like she was being watched, Anita rubbed the back of her neck and tried to shake off the sensation. Nobody was watching her. She was alone.

Her mental processes were sluggish and fogged, leaving her in an endless haze with little reality remaining. She couldn’t explain it but she felt eyes on her. The idea of losing her mind had her chest tightening with fear and her heart pounding. She didn’t have any family left. No close friends. There was nobody to take care of her if she no longer could be on her own.

“Keep it together, girl. You’ve gotten through tough spots before.” The weak sound of her raspy voice didn’t provide the reassurance she’d been going for.

In a moment of clarity, Anita realized her situation had become desperate. Although she had one remaining protein bar in the small pack slung over her shoulder, she wouldn’t eat it before finding another source of nutrients. That last bit of food was her final lifeline, one she wasn’t prepared to give up. All things considered, her survival instincts had kicked in and she would do whatever it took to live another day.

“Keep moving, girl. One foot in front of the other.”

A twig snapped nearby and her gaze shot in that direction, scanning for the presence she still felt. If someone was there wouldn’t they come over and offer assistance?

Anita sucked in a sharp breath. There, behind some foliage. Twin sparks of shimmery amber. Were those…eyes?

Holding perfectly still, she barely breathed while she stared hard at the spot she’d thought there’d been…something. Someone? An animal?

Please don’t let it be a mountain lion. Not a wolf either. And definitely not a bear.

She’d be okay with a mule deer or bighorn sheep. Could handle a cute marmot or snowshoe hare. Just not a predator. No predators allowed.

When nothing moved, made a sound or showed itself, she chalked the experience up to the effects of dehydration on her mind. She listened intently for several moments, hoping to hear water moving in a creek or stream. No such luck.

Her ankle ached with each step but she kept going. Looking at the sky, she realized hours had passed. Soon she’d have to find shelter.

A flash of black in her peripheral vision had her spinning to the right just as something big rustled a bush. Anita waited. After several moments a broad black snout poked through the vegetation and sniffed the air.

Her feet rooted to the spot regardless of her head screaming commands to move, run, climb, hide…

More rustlings erupted as the snout lifted above the leafy plants. Short and stout, not a bear, thank goodness. An amber gaze flashed and the head appeared.

Stunned, she could only stare. Her mind couldn’t process the information coming from her eyes because what she saw was impossible. Not in the Rocky Mountains. Yet there it was—a black, distinctly feline head.

In a moment of lucidity, Anita figured she had to be hallucinating. Black jaguars didn’t exist in Colorado. They could generally be found only in dense rainforests, savannahs and swamps on other continents, so there was no way she was seeing one here.

Closing her eyes she chanted, it’s all in your head, over and over again. Now open your eyes and there will be nothing there.

Blinking her eyes, Anita gasped. Not only was the black jaguar still there, it had partially emerged and the figment of her imagination was massive. Much larger than any feline she’d ever seen before. Bigger than a male lion. And deadly sharp white teeth were clearly visible in its parted mouth.

The cat moved closer, one cautious step at a time.

Drop down. Roll into a ball. Play dead. Orders screamed through her head but her body remained frozen. And what the hell was she muttering?

Yup, it was official. She’d lost her ever-loving mind.

“Good, kitty. Stay.” Okay, it wasn’t someone’s dog that would follow commands, dammit, but it was worth a try. Her life was on the line and if the big-ass cat followed directions she just might make it out of this in one piece, alive and breathing.

Taking a tentative step backward, she watched the cat like a hawk. Not even the tiniest ripple of movement so she took another.

What the fuck, Anita? You’re singing to a jaguar?

And what the fuck was she singing? She knew the song, could picture a tall, dark-haired geek in a red Flash T-shirt but didn’t know how she knew him.

Shaking her head she kept moving slowly until the jaguar stood up.

The cat smiled. It did. It fucking smiled at her. Was it…taunting her?
Posted by Nicole Austin at 12:00 AM