Excerpt From WEAPON OF CHOICE by Katherine Kingston 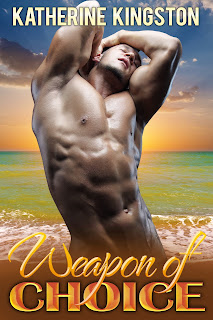 Blurb:
Selvya's gift for controlling fire made her a weapon in the hands of unscrupulous men. The king's commander offers a chance for revenge and redemption, but it's a risk she's not sure she can take.


Selvya sat cross-legged on the bare stone floor, hands extended, struggling to control the tiny flame that danced on her palm. Such a small flicker and yet so hard to get it to move. Once she’d managed huge conflagrations and even directed an enormous forest fire. Now she could barely make this little wisp shift. For the last twenty minutes she’d bent her will on it and only produced a few wiggles.

She channeled all her energy into it, letting the heat and crackle of the flame resonate in her brain. Up another inch, she directed. The flame didn’t exactly resist. It began to stretch itself out, climbing upward a little. But she couldn’t generate the mental force to fuel its growth more than half an inch. Her hands trembled with the effort and exhaustion threatened the little control she had. With a deep sigh, she shook her fingers and dismissed the flame.

“That was better than yesterday.”

She yelped and spun around on her rear. Jorden Corsos, Duke of Cartallia, sat on one of the two hard iron chairs in the room. She hadn’t heard him enter, though given how hard she’d been concentrating, it didn’t surprise her.

“How long have you been there?”

Her knees locked when she tried to stand. He extended a hand to help her up and again she experienced that odd, frightening, humming sensation when their palms met.

“Ten minutes or so.” He made no reference to whatever passed between them, and his expression didn’t change when he released her. “You’ve made some progress. Yesterday there was nothing.”

“I barely managed this. So tiny and it still took so much effort to control it.”

“It’s coming to you.” He stood up and went to the door, spoke a few words to someone there, then returned. “Can we go somewhere more comfortable?  I’ve ordered a tea tray.”

She stared at him, bemused for a moment. “Of course.” What was he doing here? Checking up on her? Was he unhappy with her lack of progress? And why did her heart do a strange little flip-flop in her chest? She led the way to the next room, which served as a parlor. Padded chairs, a woven rug, a few tables, and shelves holding a variety of books made this a more relaxing space. He waited until she settled in one of the armchairs before he sat.

“Are you comfortable here?” He waved an arm around the room, encompassing this one and the other three rooms that made up the tower suite. “You’ve asked for very little.”

“And you’ve given me much more. The clothes alone…”

He smiled broadly. “Worth every pence. I still find it hard to believe you’re the same woman as the dirty, skinny, bedraggled creature I first met.”

“Fresh from the dungeon.”

“Even so. I’d never have guessed there was so much grace and beauty under all the grime.”

“Not a bit. The transformation is stunning.” He looked around. “You have all that you need?”

“You’ve been able to call a bit of fire, I see, so your ability wasn’t completely burned out.”

She sighed. “Not all of it anyway. But what I can do is so limited now.”

He settled back in the chair. “Why is that, do you think?” He sounded curious but not worried. Because he didn’t want to seem to pressure her into too much effort too fast?

“I don’t know. I may have just used up every last bit of reserve I had when I did the fire for the young baron, and it will take time to restore it. Or perhaps creating that fire burned up whatever channels in my mind let me call and control the flame.”

“If that were true, you shouldn’t be able to create even the small spark you did earlier. Possibly what happened when you called that last flame was so horrible your mind rebelled and is blocking your attempts to do it again.”

She stared at him for a moment. From their first interactions, she’d known he was intelligent as well as handsome and high-born, but the depth of his understanding astonished her. “Yes, it’s possible.”

“It’s also possible that you’re now trying too hard. You’ve done nothing the last few days but work with the flame. You need to relax more.”

“You’ve had people spying on me?” Of course he did, silly. He’s invested a lot in you.

“The servers who bring your meals report back to me. You were already at work with the flame when they delivered the last two morning meals and still doing it at the evening meals.”

“You want the weapon I represent, and I want to have this war done with.”
Posted by Nicole Austin at 12:00 AM