Excerpt From ONE KINKY WEEKEND by Berengaria Brown 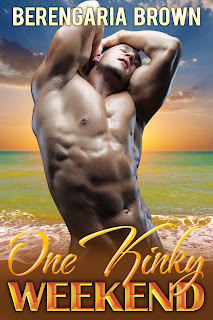 Blurb:
Logan and Zara’s sex life is dead boring, so they ask another couple to join them for a very dirty weekend of naughty sex.


“I was thinking about brightening up our sex life.”

His big body went still against hers and she could feel his muscles tensing up.

“You meant it when you said we could try out some new things, didn’t you?”

His voice was firm but his body was still tense. She wrapped a leg around his hips, wiping her damp cunt along his upper thigh.

His big hands grabbed her ass and ground her pussy hard against him.

“What about a foursome? The two of us and another married couple. All four of us in bed together, everyone doing everyone, two men, two women, the four of us in a daisy chain, whatever we all want to try.”

He lifted her up slightly and slid her down on his cock. It filled her completely, stretching her tissues. “Hmm, someone likes that plan.”

She sat up a little, flicking her blonde hair off her face, pushing the bedding off her back, and braced her hands on his chest. Although his sandy-brown hair had a few gray threads in it these days, he was still a solid wall of muscles, as his daily gym routine had kept his body toned and fit. His nipples stood up under the tweaking of her fingers and his cock thrust up inside her, high, hard and longer than it had been a few moments ago.

She swiveled her hips so his cock scraped over her G-spot, then leaned forward to press her clit into Logan’s pelvis. His hips rose up under her, his thighs raising and lowering her, faster and faster, his hands tight on her hips.

“I do like that idea. We’ll have to choose the couple wisely though. It has to be people we’re compatible with and trust.”

“Condoms,” she gasped, her orgasm rising inside her as she wiggled her hips again. “Don’t want any worry about health risks.”

“Excellent idea. You deserve a reward for thinking of it,” he whispered, thrusting a finger deep into her ass, and sucking her nipple and the entire areola into his mouth. His cock was still half hard inside her and he moved his hips enough to stimulate her pussy too as his finger pressed wickedly deep into her dark channel, the nail teasing every nerve ending there. His mouth was busy licking, sucking, nibbling her breasts, switching from side to side, adding a tiny bite here and there to tease her sensitive skin.

Zara felt another orgasm blooming in her core, hotter and harder than the previous one.

Logan redoubled his efforts, his hips pumping, his cock growing inside her, and three fingers now thrusting inside her ass.

He bit down on a nipple as a fingernail dug into her clit.

She burst apart, her toes curling in the most delicious way as her body thrashed in spasms of delight.

“God, you’re good at that,” she murmured.