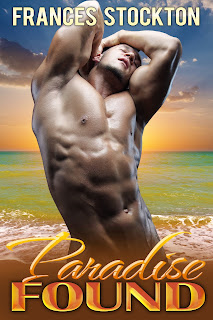 Blurb:
When Cara Summers and Ian Hamilton are selected for a contest to live off the grid on a private island both have their reasons for needing the grand prize. Neither expects an instant attraction. As the temperature rises between them will they find love or end in heartbreak when reality returns?


“Welcome Dr. Hamilton and Ms. Summers. I’m Greg Abbot. Mr. McFadden has arranged everything for your stay. May I see your IDs before we depart for the marina? You’ll receive further instructions there.” The driver was pleasant as he pointed to the identification badge clipped to his pocket and they showed their passports.

The problem? The taxi was tiny and Dr. Hamilton was anything but small. Neither was she. Still, he was broad, with big shoulders. And a handsome face that belonged on the front of GQ. He had charisma and confidence in spades.

At the moment, he wore khakis, a navy polo shirt, and Crocs on his feet. Big feet! Did that translate to anything else about him? Cara imagined him in shorts or swim trunks, or nothing at all.

“Forgive me for being a little stunned by all this, I’m Cara Summers,” she said, offering her hand to the doctor.

“Nice to meet you,” Ian replied, next thing she knew her hand was engulfed by his. His fingers were long, callused. His grip was firm. His touch like a lightning bolt jump starting her dormant libido. “Sure you don’t mind cramming into the same car?”

“Of course not. You’re from Boston, aren’t you?” she asked, recognizing his accent when he said cah instead of car.

“Southie, born and raised, have a place in Seaport now,” he commented.

“Awesome! Maybe after this adventure is done we’ll stay in touch.” Then again, he could turn out to be a big jerk with an ego the size of the Prudential building.

With introductions made, the driver stowed their carryon bags in the trunk and assisted her into the back of the car. It was an older model, clean but cramped. Honestly, she didn’t mind the tight fit, especially after Ian had wedged himself into the backseat.

“Thanks,” she replied, doing so. By some divine power above, she was scrunched-up against a hot man whose scent reminded her of chocolate.

“Helluva winter we had this year,” he said.

“I can’t tell you how many times I had to dig out my car. There’s still a mound of snow melting in the back parking lot of my apartment building. It’s an unsightly mess, to be honest, more sand, grit, and who-knows-what than the fluffy white stuff.”

“Really? Thought the snow-melters took care of it in the spring. Do you live in Boston?”

“Listen, I’d been debating introducing myself sooner, but you had blinders on most of the day.”

“Not virtual ones. You were distracted, maybe more than I was.”

“Hmm, I can’t deny it. Mind if I ask why you applied for the contest?”

“That’s easy. To get away and make some decisions about my future. What better place to do that than a solitary island in a tropical paradise, you know?”

“Actually, I do. Something about you is familiar,” she admitted, looking at him.

He had short wavy dark auburn hair and a day’s beard growth. Though he wasn’t a pretty boy by any stretch, he was handsome with a strong chin, a straight nose, and his eyes sparkled like emeralds.

She loved green eyes, especially on men, guessing he had Scottish ancestors. Tempted to ask if he wore kilts, she bit her tongue and tried to remember where she’d seen him before.

“Is there?” he asked. “Until three nights ago, I was working extensive hours in Boston Med’s ER to get ready for some R&R. You haven’t been treated for an emergency lately, I hope?”

“Nope, very healthy. I tend to work evenings and weekends, so…wait, I know!” It came to her in a flash. “You’re the doctor who talked down a gunman!” In every interview, he’d been wearing hospital scrubs, a matching blue cap, and a white coat. In person, the man was a certified stud.

“I had no choice. He was a teenager, panicked about his baby sister getting hit in a drive by. He stormed in demanding we save her.”

“You saved her and the patients in the waiting room, the nurses and staff, too. Thank you, for doing what you did. I saw the news conference. You were so calm and confident. I doubt I’d have been the same.”

“I went to college on the GI Bill. Served as a medic in the Army Reserves before going to med school. I’d thought it had prepared me for anything. I was wrong. Seeing that little girl was one of the worst nights of my life. It was only a miracle that I managed to talk her brother out of putting a bullet in me or anyone else.”

“I’d think working in an ER would be exciting.”

“It is. Just thinking about the long term. I’ve been offered a more lucrative position as department chair, but I’ve wanted to open my own emergency clinic since residency.”

She smiled, looking over at him. “Been thinking about the future, too.”

“Really? Is there someone waiting for you back home?”

“Not anymore,” she grumbled, the pain of heartbreak far less when a hot doctor was holding her hand.

“Want to talk about him?”

“If I said it was none of your business, would you respect that?”

“Without question. If I’m misreading the signals between us, forgive me. Just know you can trust me.”

“Did that once, the trust thing, for too long, and listened to one too many excuses. Never again will I do that.”

“Whoever he was, put him in the past. Maybe if you do, you can let go and enjoy your time in paradise. Or at the very least, smile. You’ve a beautiful expression, lights up this cab.”

“Thank you, I’m flattered, truly. I plan to have fun. And, I plan to win my half of the prize.”

“Truth is, I thought the whole contest was bogus, at first. After I’d heard about the number of entries, I sent in an essay explaining what I would do if was stranded on a deserted island and donated the entry fee as directed to the organization of my choice. I gave to a women’s shelter.”

“I sent mine to a fund for amputees. Almost missed the deadline. Glad I didn’t or I wouldn’t have met you.”

Ian turned toward her, flashing a devilish grin that made his eyes sparkle and erased the worry-lines fanning his mouth. She didn’t know anything about this man, yet she wasn’t afraid to be alone with him. Maybe it was familiarity through a news conference brandishing him as a hero, the contest, the idea of leaving stresses behind, or something elemental.
Posted by Nicole Austin at 12:00 AM