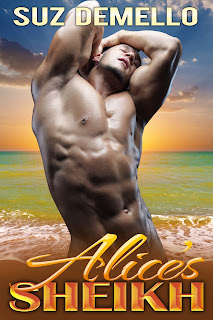 Blurb:
A virginal English noblewoman finds herself under the complete control of an autocratic sheikh--an unexpectedly sexy one who will do whatever he must to have her.

The clatter of gunfire shocked Alice Fortune into brief immobility. Dropping everything, she ducked for cover under the nearest row of shabby seats. The terminal’s interior lights went out, leaving a blackness so absolute that it warned of a widespread power outage. Even the car park’s lights had ceased twinkling through the grubby windows.

Shouts in a language she didn’t recognize pierced the air, but otherwise, the little terminal was deathly still. She wondered if airport personnel knew of an impending attack, for she was alone. Her heart banged against her ribcage, and she told herself to stop inventing tales to scare herself more. Wasn’t the situation frightening enough?

Sticky sweat poured off her body while the terminal, without air conditioning, rapidly became sweltering. She huddled deeper behind the dubious sanctuary of the chairs. After her eyes adjusted, she dimly perceived lumps in the darkness—her luggage, including her satchel. She reached for the satchel with a hesitant hand, but it was inches beyond her grasp. Sprawled beneath the chairs, she wondered if she could take a chance, scoot out and grab her most valued bag.

I am not a ditherer, she told herself. Fortunes do not dither. We fling ourselves headlong into whatever fate tosses our way.

A distant motor rumbled, the sound growing louder, coming nearer. She wriggled out from underneath the chairs, reaching for the satchel’s sturdy leather strap.

A door flew open and whacked the opposite wall. Bright lights stabbed through the thick gloom, streaming through open double doors opposite the terminal’s street entrance. Silhouetted against the light was a man, tall and muscular. He strode into the room, grabbed her questing wrist to haul her out from under the chairs and onto her feet. “Hurry! We haven’t much time!” he shouted over the beat of a helicopter’s blades, the growl of its engine.

She stumbled, and her ankle twisted. With a yelp, she regained her footing and jerked her wrist away. “Who are you?”

“Harry Ashraf. I came to pick you up. You’re Alice Fort, aren’t you?” His firm, commanding voice reflected an Oxford education and much impatience.

Harry Ashraf. She peered more closely at him and, despite the dim and shifting light, recognized him from photos she’d seen: Sheikh Haroun ibn-Ashraf al-Aghiba, her employer. Hot Harry, the tabloids called him. The appellation was beyond apt. Large dark eyes, fringed with lashes a woman would kill for, plus cheekbones higher than Everest and a mouth made for deep kisses.

A masterful attitude that made her think of hot sex and multiple orgasms. Not that she’d ever experienced either, but she read a lot. And hoped. And dreamed.

“So come on. We haven’t much time. The rebels have cut the power lines and they mean to take the airport.” He seized her again, and wisdom told Alice not to resist his strong grasp.

But Fortunes tended to be impulsive, not wise. She tugged her wrist out of his hold and went for her satchel.

“Leave your bags. Everything you need is at my palace.”

“How do you know what I need?” she shouted at him, straining to be heard above the helicopter.

“Listen to me! Are these objects, these bags, worth our lives?”

He threw up his hands. “Fine, fine! But come on!” He sprinted toward the doors.

She grabbed her satchel by its strap and stumbled after him, passed through the double doors and into a tunnel, the illumination provided by the helicopter’s lights at its end. He was far ahead of her, and she feared she was slowing him down too much.

Without warning, he turned and tackled her, shoving his shoulder into her midsection. He straightened. Grunting, she folded over his shoulder, draped over him like a poncho.

He ran for the helicopter. Alice clutched her satchel’s strap with one hand and a loose bit of Harry’s camo flight suit with the other. Upside down, she squeezed her eyes shut to avoid getting nauseated, and found herself overwhelmed by other sensations. The hardness of Harry’s body. His male scent. His strong arm wrapped around her thighs, holding her securely.

Desire thundered through her, but how could she be thinking about sex? She squirmed. His grip tightened, and need rushed through her in hot, unwelcome waves. Control yourself. She breathed deeply, hoping she’d calm.

He raced through the tunnel, out of the terminal, and pounded across a short stretch of tarmac to the waiting bird. His arm loosened, and he slid her down the length of his muscular body, then set her on her feet. Gently.

A wave of dizziness that assailed her. She swayed.

He caught her around the waist. “Hang on.” His arm was around her, secure and strong.

She gulped and grabbed onto the front of his flight suit. His chest was solid beneath her scrabbling fingers. She looked up, meeting his gaze.

He smiled into her eyes, and her heart jumped. Then she remembered who he was—her boss—and let go of him. He opened the door of the ’copter and said, “Get in.” Gunfire popped, a little closer, and she gasped. He boosted her up and into the small round cockpit, seemingly without effort. After he ran around to his side of the ’copter and jumped in, she noticed he wasn’t panting, didn’t show the slightest sign of exertion even though he’d just carried a fifty kilo woman fifty feet and lifted her another ten.

She slid into the ’copter’s seat, then set her satchel on the floor next to her feet, relieved to hear no clink of broken glass or scrape of shattered pottery. Fumbling at the unfamiliar, many-strapped seat belt, she tangled it completely while Harry secured himself and lifted the bird into the air.

His arm shot out to keep her safe. “Steady, now.” His voice was composed, with warmth overlaying a steel core.

Below her, she heard another deadly clatter and a ping, close by. She sucked in a tense breath and clutched his hand.

“Submachine rounds, probably AKs.” Using his one free hand, he piloted the ’copter out of the combat zone, up first, then in a long smooth arc. The lights of Port Sudan receded, then disappeared into absolute darkness. She guessed they’d flown over the Red Sea.

“Let’s get you squared away, shall we?” His voice was raised against the beat of the engines.

“All right.” She was surprised at how calm and collected she sounded. She loosened her grip on his wrist.

He reached beneath the seats. “Here are some headphones.” He handed her a set and put his on.

She adjusted them over her ears, enjoying the sudden quiet. She hadn’t realized how loud the helicopter was until the racket was blocked. He said, his voice now rougher and tinny through the headphones, “The seat belting is in a star shape. The bit you’ve twisted doesn’t go over the head, but from the right side and clips in the middle. The other section comes from the left.” He reached across her to grab the right hand portion of the seat belt’s buckle, and brushed the front of her shirtwaist in passing before he untangled it. Though his fingers were inches away from her breasts, her nipples nevertheless reacted, and she blessed the dim light in the cockpit.

To cover her embarrassment, she groped for the left side of the seat belt. She found the flat portion of the buckle and shoved it into the part that Harry held. It nested with a click.

She leaned back into her seat. “Can I relax now? Are we going to be all right?”

He smiled, dazzling her again. She wouldn’t soon forget the feel of his arm around her.

“Of course, we’ll be fine,” he said. “We were never in any serious danger.”

“Any serious danger? We were shot at.”

He dismissed the attack on the airport with a fatalistic shrug. “Yes, well, stuff happens.”

She stared at him numbly. “Stuff happens? Do people shoot at you so often that it’s commonplace?” He was awfully cool under fire, while she’d turned into a quivery pudding.

“It’s the Sudan.” He sounded calm.

“The Sudan? Stuff happens because it’s the Sudan?” Was he quite sane? Both she and her solicitor had researched Sheikh Haroun and his kingdom carefully, and had discovered nothing amiss.

“Do you always repeat what others say?”

“I suppose it is part of teaching English as a foreign language. The repetitions. I remember it well from my language classes.” His smile flashed again.

Was he teasing her? She giggled, then stopped the sound at its source. Don’t flirt with the boss, she told herself. No affairs allowed. Passion wasn’t a part of her life and never would be. Her parents had lived passionate lives, and look at where they’d ended up—dead in the Trevi Fountain.

“Yes, um, well, I guess I do repeat out of habit. I’ll try to stop,” she said, hoping she sounded humble. Didn’t sheikhs like humble females? Maybe, but that attitude would be tough for her to maintain. As a teacher, she was used to telling others what to do, and knew that she’d have difficulty kowtowing to Sheikh Haroun ibn-Ashraf al-Aghiba.

“Oh, don’t change on my account. It is important that you are happy in our realm.”

“In…Aghiba Jazirem.” She hoped she wasn’t butchering the name of his country.

“Yes, our islands. Barr Aghiba is the largest, where most of us live. Where you’ll teach.”

“I’m very excited, and a little surprised you hired me sight unseen.” Shocked was more like it. What had Rabbie White told Sheikh Haroun?

He shrugged, his hands firmly on the ’copter’s controls. “The islands are remote, and we have had trouble keeping a teacher for any length of time.” He sneaked a quick peek at her before again focusing on the ’copter, and she couldn’t help blushing even at that slight scrutiny. What was wrong with her? Stop it, she told herself. No flights of fancy or unsuitable liaisons would distract her from her goal—earn her inheritance and return to her beloved London.

“My contract is for one year. Only one year.” And Rabbie White wouldn’t allow her to use her famous name to succeed. She found freedom in that. Every time she looked in a mirror, she saw Mara’s face, but others didn’t.

“It is our hope you will love our lands as much as we do, and stay for a long time.”

“Um, well…” She didn’t want to insult his kingdom, but felt she had to be honest. “I’m a Londoner. I’ve lived there all my life, and can’t see myself anywhere else.” She loved her city’s misty weather, fascinating architecture and beautiful, leafy parks.

“You already sound as though you miss your home, and you have not been gone even one day.” His voice had acquired a sharp edge.

“I beg your pardon?” Was he questioning her integrity?

He shrugged. “The weather is hot. There are no other British women on the island, no other female who speaks your language or for you to, hmm, how do you say it? For you to relate to. You’ll become bored and try to leave. They all do.”

“I plan to keep my word.” The nerve of the man.

“Of course you will. There are few ways off the island.” He glanced at her, his dark eyes gleaming. “You will, practically speaking, be my captive.”

Silence fell, broken only by the drone of the engines, distant through Alice’s headphones, echoing the roaring in her ears. What had she done? Had she delivered herself into the clutches of a madman?

“What do you mean?” she asked carefully.
Posted by Nicole Austin at 12:00 AM