The Haunted House by Francesca Hawley


Francesca Hawley here! :-)  I thought I'd share a grown-up ghost story with all of you for my October post. Happy Halloween!

Please note that this story is explicit and meant for those 18 and over. 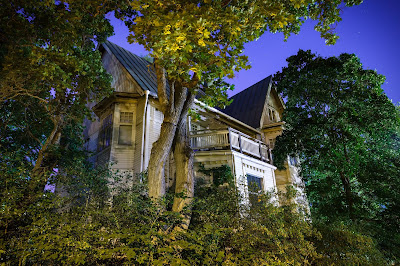 Julie tugged her sleeping bag over her shoulder and followed after her friends, tugging at her backpack that held her supplies for the night. She shouldn't have agreed to this. She hated dark creepy, dusty places and she had no desire to meet a ghost. She wasn't ready to admit that to anyone, though because she knew they’d laugh at her. This should have been such a lark. A bunch of friends celebrating their recent college graduations. Instead, this sucked big time.

"C'mon Julie. We need to stake out our spaces for the night," her friends called as they entered the dark house. When they paused in the entry hall, she sneezed from the dust wafting in the air.

"So we each pick a bedroom and sleep in it. Then we'll compare notes in the morning." Lisa, the groups’ ringleader said.

"We aren't going to stick together?" Julie's belly tightened. Fear flitted along her nerves. Shit. She hadn't expected this.

"No. Splitting up is half the fun," Lisa laughed.

Right. As if. Julie forced a smile to her lips as Lisa rolled out a floorplan.

"Got this from the assessor's office. The place has been empty about five years. The last owners swore there was poltergeist activity and abandoned the place. So there are bedrooms upstairs. Katie, you sleep in the gold room. I'll take the blue room. April, you set up in the green room and Julie, you take the red room."

"Red room?" She asked as they other girls grinned at each other.

"Are there really any ghosts here?"

"Which room has the most activity?"

"The blue room. That's why I grabbed it for me. There's supposed to be a ghostly lady dressed in Victorian clothes who hangs out there."

"What about the red room? Any ghosts?"

"Not that I've heard, but you never know. You might get lucky. Let's go upstairs and get settled for the night."

Julie swallowed hard. She really hoped this whole thing was a big joke. They left her inside her room and shoved the door shut. For the next half hour or so, as she spread out her sleeping bag, dug out her flashlight and drank some water from her bottle, she heard slamming doors as the other girls laughed together. Julie pulled on a sleep shirt and tugged her jeans off. 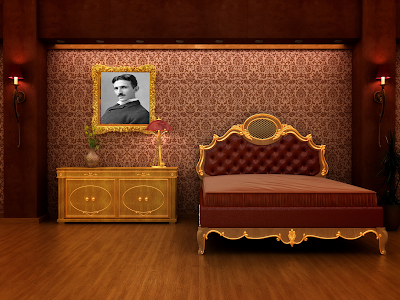 She looked up at the red walls, shuddering as the sun set. She really wanted to go back home. A portrait hung over the head of the bed. He looked formidable. Stern. But he was mega-hot for all that. Julie crawled into the sleeping bag and stared at the portrait, slowly drifting to sleep as she wondered what Captain Striker had really been like.


Warm fingers slid up her thigh. Teasing. Enticing her to spread. She sighed and lifted her hips. A stroke fluttered against her pussy lips. Pressing her silky panties against her. She sighed, kicking the sleeping bag out of the way and tugging her nightshirt up so that the warm hand could get at her slit.  Silk was tugged out of the way and a long, rough finger slipped into her folds. A male finger circled her taut clit and she moaned. The finger paused.

"No, don't stop," she muttered, spreading her legs wider. She heard a low masculine chuckle. He caressed her again. Flicking fingers against her clit.

"Take off the panties," a deep voice whispered to her in the dark.

She obeyed, wondering at herself. A man was with her. One she didn't know. A tongue lapped at a nipple through her t-shirt. Biting and sucking. She sighed. It was a dream. That's all. A really great dream. Julie relaxed and let him continue after she slid her panties down her legs, kicking them across the room.

His hand slid between her legs again. Stroking her. He slipped down between her thighs. Lifting her legs up to his shoulders. He parted her and she cried out as the flat of a tongue lapped at her clit. She sobbed as he ate her and wormed fingers up into her pussy. Fondling her and spreading her juices while he sucked her. Julie drove her cunt onto his fingers. Encouraging him to fuck her. She gasped as desire clenched inside her.

He rose above her and she reached for her dream lover. Pulling him into her arms while he continued to thumb her clit, readying her to take his cock. She rode his hand, sighing into his mouth. Lambchop style whiskers teased her cheek and a bushy mustache tickled her mouth. She opened for him. Tongues twined as the weight of his body settled over her. Bare skin met her hands. Warm flesh. She caressed his shoulders, his back, grasping his ass. 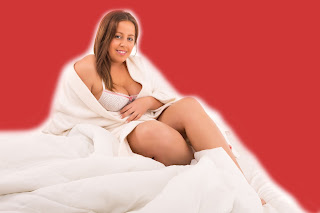 A soft groan teased her ear and she felt a long thick cock ease inside her. Fill her. She lifted her legs up along his hips, wrapping around his waist. He tugged her nightshirt upward and together they pulled it off. His mustache tickled her breasts. It made her squirm in his arms. Giggle at the light touch of the bristles against her nipples and the rise of her breast.

His hips drove forward and she opened for him. Raising her hips to welcome him inside her wet sheath. His hips rolled against her and she twisted back. Grinding against him as he thrust and withdrew.

"So wet and hot. I love that sweet muff of yours."

He obeyed. Driving deeper. Picking up the tempo. She gasped against his cheek before he took her mouth with his once more. Their tongues twined as he buried his cock in her. She moaned into his mouth. Stroking her fingers through his hair. Sobbing with excitement as his hands cupped her ass. Holding her tight so he could command her body.

Her nipples tightened. Desire coiled in her lower body. Tension spiraled as he took her. He shuddered, expelling a breath against her lips. Soft cries filling the night air. God, she wished she could see him. If only the moon would come out and shine through the window so she could enjoy the look of arousal on his face as well as the sound of his grunts as he pounded into her. They writhed together. Hard. Fast. Deep. She arched upward. Grabbing his shoulders. Clutching at him as he plunged into her. Grinding together to increase their satisfaction.

He groaned, kissing her. She was so close. Just a little more. A stroke or two… Her nails dug into his shoulders as he hit bottom. She went rigid then began to shudder. Spasms moved through her in rising waves. Driving her higher and higher. She clenched on him. Milking his cock.

As if he'd waited for her plea, he went rigid. His cock jerking inside her. He shot his cream inside her pussy and she cried out again as another climax shook her. She held him close. Not wanting to let him go. She hadn't been fucked so well in months.

Julie glanced out the window and the clouds parted. Finally. The full moon shining through. Her lover lifted his head and the moon illuminated his form. She saw his face and he looked familiar. Painfully familiar. She looked from his face to the painting above the bed. The painting was empty. Only the background showed. Waiting for its subject to return.

He smiled slightly and the moon began to shimmer around him. It was like glitter clung to his skin and he began to glow. Fade slightly. She sat up as he returned to insubstantiality, reaching for him. He held out his hand, but her fingers pass right through him.

"One night a year, I can escape my prison on the anniversary of my death. Come back next year. I'll be here."

He shimmered for a moment then disappeared. She looked up at the painting above the bed. He was back in the frame. A smug smile on his face. She grinned. He looked happy. Satisfied. She licked her lips and made plans for a return visit, curling back into her sleeping bag.


In the morning her friends packed up. Lisa bitched and moaned. "What a wasted trip. There was no ghost at all." She glared at each one of them, finishing with Julie. "Did you see any ghostly visions?"

"Ghostly? No. My night was completely spent in the physical realm."

Julie paused. "I'll come back. I had the best night's sleep ever."

"Well then you come back alone." Lisa stomped out the front door followed closely by the other two girls.

Julie looked up the stairs. She fancied she saw him at the top of the stairs. Whether she did or didn't was irrelevant. She intended to return and just maybe when he returned to the painting next year, he'd have a wide grin on his face.


Posted by Francesca Hawley at 3:30 AM