Excerpt from An Unexpected Discovery by Regina Kammer 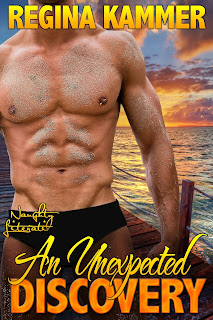 They entered her apartment from the women’s gallery, stepping through the office to the antechamber. Nisa opened the door to the audience chamber, and Roedogune followed.
A flush crept up the back of her neck the moment she saw him.
He was young, about her age. Tall and slender, standing with confidence. Under his cap, black hair in perfect plaits fell to just above his shoulders. He wore the costume of a courtier, for that he most certainly was, his robe and tunic rich in decoration. Jewels glinted from the rings on his fingers. Gemstones hung in strands around his neck.
Amidst all his magnificent arrayment, one feature stood out.
He was beardless.
Of course. A eunuch. For such a man was indeed allowed to be alone in the presence of the princess.
“You are dismissed, Nisa.” Roedogune waited for her maidservant to leave before addressing the man.
She paced, studying him. His nose was strong and straight punctuating his confident demeanor. “My husband sent you?”
“Yes, my lady.” His voice was not deep and gruff as that of Gotarzes, but melodic with a masculine edge.
Roedogune stood directly before him. “Your name?”
“Arashis, my lady.”
Seeing a man’s cheeks and chin and mouth was something of a treat. The Roman soldiers of her captivity had been clean shaven, despite the fashion of their emperor Hadrian. A beard could create an illusion of vigor and virility. But here, laid bare before her, was an elegant strength, angles set off by the curves of luscious, full lips.
“Did my husband explain why he sent you?”
The briefest flick of a tongue wet the seam of his mouth. A delectable distraction until he spoke with that lulling voice.
“He said you had spent time in Rome. That you intended to maintain your communications with contacts you had made during this time. That you might require the services of one who knew the languages of the Parthian and Roman empires.” He shifted on his feet, bending slightly to reach behind him. He turned back holding a basket of scrolls.
Apprehension rattled her. “What are those?”
“Communications, my lady. From your contacts beyond our kingdom.”
“Gods above,” she muttered. Gotarzes had been holding on to the missives all this time. She picked up a scroll. The seal was unbroken. She exhaled relief.

“My lady, if I may be so bold, you seem agitated.”

She lifted her head only to gaze upon the kindness in the depths of his rich brown eyes. “It seems I have a great deal of correspondence to catch up on,” she said, tossing the scroll back in the basket.
Posted by Nicole Austin at 12:00 AM