Another One's Out But Life Intervenes

A couple of weeks ago, I finally got the third story in the Suburban Dominants Series, Charming 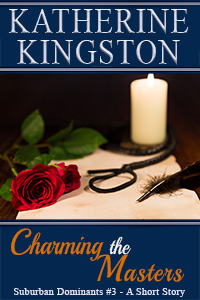 the Masters out the door. The fact that this one is a short story made it easier since I'm re-editing and reformatting all of the books before I re-release them. There were things about the way my former publisher edited my stories that really irritated me. The use of certain words that I despise, but they considered essential. Certain grammatical imperatives that seemed nuts to me.

All this is the long way of saying that it takes me a while to get a story ready for re-release. I'm a perfectionist and picky about the details. I want it to be as perfect as possible.

So Charming the Masters is now available as an ebook at Amazon, Barnes & Noble and most other ebook retailers.

I had hope to have the fourth, Kyle's Bargain, which is a full length novel, ready to go by the 15th of May, but I don't think that's going to happen.  I'll have visitors in the house for the next two weeks, which means not much writing will happen.

In the meantime, though, the Naughty Literati will be releasing Naughty Heatwave on June 1st.  It looks like a terrific anthology, with ten stories from some amazing writers.  My own story is titled Weapon of Choice .  It's another of my paranormal stories, though this one has a more traditional fantasy sort of setting. Selvya’s gift for controlling fire made her a weapon in the hands of unscrupulous men. The king’s commander offers a chance for revenge and redemption, but it’s a risk she’s not sure she can take. I hope you'll enjoy it!
Posted by Kate Kingston at 6:28 PM