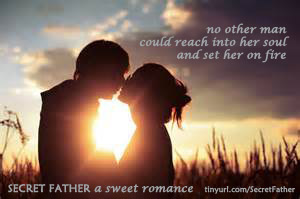 While the Naughty Literati specialize in sexy, steamy or even scorching-hot romance, for a major part of my career I wrote sweet romances for Harlequin. I wrote for Silhouette Romance, a now defunct traditional romance category. While I was doing so, I wrote Secret Father, which Harlequin didn't buy--the line folded and I was orphaned, a dire situation for a writer.

That was a long time ago. I shifted my focus and started to write steamy, erotic romance, which to me reflects the natural, sexual nature of humans as thinking animals. Sweet romance always seemed so artificial, and I ended up writing it due to the mismanagement of my first agent, who really wasn't paying attention to a then-inexperienced and little known writer. It was actually a fairly frustrating time for me as a writer--I found myself creating situations to get my characters married and into bed ASAP, at least by the midpoint of the book--the tenets of sweet romance allow sex after marriage, and some of my books became moderately--well, not graphic, but clearly, the characters were doing it with a fair level of realistic though not crude description.

So, Secret Father languished--until now. I released Secret Father independently of any publisher, having had enough of behavior that seems to range from incompetence to outright thievery.

Here's a little about it:

When Linda Travers was fourteen, Dave Madsen, then age seventeen, rescued her from a snowy death. They later met at an end-of-term party at their college and lost their virginities to each other before Dave left the country. 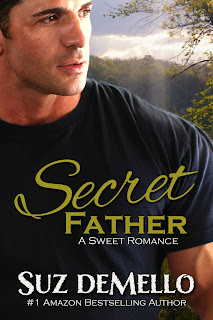 And now...Despite spending her teenage years mooning over Dave, Linda has moved on with her life. Being left pregnant and alone will force that on a gal. Age twenty-five, she lives in their hometown with their six-year-old, Mac. Then botanist Dave reappears. A vicious snakebite has left him needing rehab from the only physical therapist around—Linda.

Their college lovemaking was the first time for both, so Linda and Dave remember each other. She’s amazed to feel the same old anger, hurt, and need. Less emotional, Dave’s curious about Linda, wondering why she didn't leave her address and phone number for him when what they’d shared had been so good. Neither totally believes the explanations the other offers.

Since the rescue, Dave was always Linda’s hero, but she doesn’t know him anymore. Is he worthy of fathering their son? And what of their love? Can they create a future…together as a family?

Carried exclusively by Amazon at this time.  http://tinyurl.com/SecretFather

Here's what Amazon readers are saying about Secret Father:

Five stars! Be sure to read this great book.
--Gloria Antypowich

Five stars! ...had be hooked from the beginning... Suz did a wonderful job.
--lexiesmomma_32

Get it soon--when it's no longer available through KU it won't be free anymore.
http://tinyurl.com/SecretFather