Going Back In Time...

I have always had a strange reaction to historical places.  As a little girl, my mother took me to a place in Georgia called Kolomoki Mounds. Covering some three hundred acres, it is one of the larger preserved burial mound sites in the United States. The mounds consist of Georgia's largest great temple mound, two burial mounds and four smaller ceremonial mounds.  Mounds A, D, and E, which form the central axis of the site, align with the sun at the spring equinox. Mounds F and D form an alignment with the sun at the summer solstice. It is not hard to understand that the ancient culture designed their worship around the heavenly bodies...as have many civilizations.

The first time I visited the mounds, I was about eight years old. I remember looking up at my my mother--who was part Cherokee Indian--and telling her I felt 'funny'. To this day I remember her smile and nod and what she said: "I knew you would. It is the spirits you are feeling. They know you."  Instead of being afraid of her words, I was oddly comforted by them. I could feel a closeness around me like welcoming arms and that was not the last time I felt that way.

In the ninth grade, my BBF and I took a trip to Savannah for the weekend with my parents. We visited Fort Pulaski on Cockspur Island. It is an old civil war-era fort that was used as a prisoner of war camp. As Marti and I strolled through the fort, I had the feeling we were not alone--though no one was near us. I could feel the presence of the spirits watching me and at one point I stopped, asked her if she saw the young man sitting in the shadow-filled cell. She just stared at me and I knew she didn't. From that moment on, the sensations bombarded me left and right until tears were streaming down my cheeks. From that visit I wrote my novel IN THE WIND'S EYE. 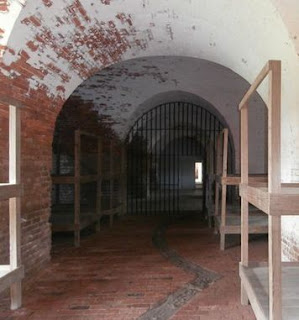 When I was our church's secretary, my desk in the office of the old converted automobile showroom where I worked for seven years sat on the exact spot where Bonnie and Clyde's death car had been put on display. There were stains on the concrete floor that came up through the carpet. Spots no one and nothing could get out. It's said the spots are blood that dripped from the bullet-riddled car. All I know for a certainty is that I never liked being alone in that office with no one else in the huge building. The feelings I had weren't comforting and I never felt at ease. Shadows moved that shouldn't have been there and there were cold spots near my desk that made the hairs stand up on my arms.

In other words, I am very cognizant of what lies beyond what we perceive as reality. I do not commune with spirits but I can feel their presence. Whether they are sad, lost, happy or angry...I seem to be able to pick up on their long ago emotions. That has been a comfort to me since my husband's passing in 2009. I've heard him, seen him and felt him many times. The last time I saw him alive was in our bedroom and in that very spot there is a warmth that never leaves the room. I now sleep on the side of our bed where he used to sleep because I knew I would never be able to look at his side without seeing him there as I did that last morning. I might have swapped sides but so did he. The very expensive memory foam mattress that should not hold an indention of the side where I used to sleep developed indentions a few days after his funeral--indentions where a heavy person's upper body and feet would be. My sons have turned the mattress over and yet the indentions return. They swapped the head for the foot and the indentions come back. They turned it over and swapped head for foot and yet the indentions are always there. No one believes me until they have actually seen those indentions for themselves.

The summer of 2007, my husband won a trip to Cancun, Mexico for his work with AFLAC. We were really excited because we wanted to visit Chichén Itzá, the sprawling pre-Columbian city built by the ancient Maya people. It was a hot day in August, sweltering when our tour bus drove into the parking area. Getting out of the air conditioned vehicle, the humidity slapped us in the face with a heavy hand. Within minutes I was sweating profusely. As we ventured into the ruins, the old familiar feelings began to creep over me and my body temperature declined.  I remember reaching out to take my husband's hand because I was being flooded with emotions I did not understand. He put his arm around me when I shivered for he knew I was experiencing once again--as I had at the Little Big Horn, Fort Robinson (where Crazy Horse was killed), and all the old battlefields we'd visited over the years. Things he could not comprehend, could not feel but accepted as part of who his wife was.

It was a dusty spot with sparse grass back in 2007. No commercialization had ruined the starkness of the ancient buildings. No greedy merchants were hawking plastic and plaster souvenirs. No ropes circled the old structures to keep tourists from climbing and exploring. Pictures of Chichén Itzá today make me very, very sad. No one is allowed on the great pyramid El Castillo, the Temple of Kulkulkan. Back then you could wonder through the observatory, the buildings, clap your hands at the ball court and marvel at the acoustics. You could climb El Castillo to see the jaguar throne. How thankful I am my husband climbed the ninety-odd steps to the top of that giant pyramid to look out over the lush jungles. Although I held my breath as he descended those short steps--fearful he would fall--it was one of the highlights of his life he told me.

At one point, I stood staring at a shimmering haze near the Cenote Sagrado (a large natural sinkhole where human sacrifices were made). Only one other person standing nearby seemed to be experiencing what I was. He looked at me and smiled knowingly. I nodded for I, too, felt the sadness and terror emanating from that weed-choked hole. I felt cold even though the air around me was steaming. When the authors of Naughty Literati decided to write about holidays and vacation spots for our summer anthology NAUGHTY ESCAPES, I jumped at the chance to write a story about Chichén Itzá. The memories, the feelings, the sensations I felt there--and brought home to Iowa with me--were so vivid, so intense they have stayed bright and sharp all this time. 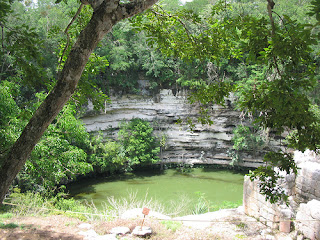 As I sat down at my desk to begin writing The WyndMaster's Escape, I felt the presence of my husband hovering nearby. On our plane ride home from our vacation in 2007, I entertained my husband with the tale of a futuristic warrior who went back through a wormhole into Earth's ancient past to visit Chichén Itzá during the Summer Solstice when a rare occurrence takes place. Thousands gather there each year to witness the phenomenon. Of how he found his destiny among the ancient ruins. Tommy had been fascinated with the tale and even suggested the names of the characters but I had never put the story to page. Once I began writing, the story of Santos and Marisol took on a life of its own. In fact, it was such an engrossing tale for me I went far beyond the set word count the NL has for our stories. Because my editor didn't want to cast aside the story as it was, we decided to split it into two stories. You'll be able to read the second part of Santi's and Mari's love story The WyndMaster's Homecoming in our autumn anthology NAUGHTY REUNIONS.

As you read The WyndMaster's Escape, I hope you will think of those who came before us. Of how much we owe to the shades and spirits who walk the ancient ruins of Chichén Itzá and all the other places were great happiness and sadness has visited the civilizations. And when you do, think of a woman who journeyed there with the great love of her life...the last vacation two lovers would ever take together. Then you will know why this particular story has such great meaning for me. 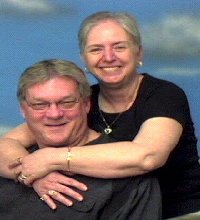 Posted by Charlee Compo at 1:00 AM