Here’s a little about Suz’s story that's in Naughty Spice, One Hot Havana Night, and how she came to write it. 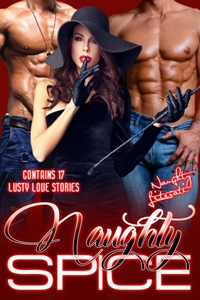 Tuesday Morning is the Best Time to Arrive in Havana

I travel as much as I can, not just for inspiration but for engagement. When I'm unhappy, the best way for me to get away from the source of my distress is to leave (duh). Additionally, when I travel, especially to someplace new, I'm deeply engaged in my life and have no mental space for worrying about whatever it was that was bothering me. When I don't know the language, don't know where I'm staying, don't know where I'll eat my next meal, I have a lot more to focus on rather than dwelling on my last unhappy love affair (usually my issue, alas).

And so it was with my 2015 trip out of the USA. After the president announced plans to open the USA's relationship with Cuba, I decided to travel there ASAP so as not to see Havana when its skyline would be dominated by the Starbucks mermaid and the Golden Arches.

But I really screwed this one up.

At that time, Cuba had no banking relationship with the USA. That means that you had to have money in hand before you left for Cuba, because your ATM card and credit card wouldn't work there. So I planned to go to Cancun, withdraw a bunch of money, and then fly to Cuba.

Unfortunately, I neglected to tell my bank, so when I started to withdraw money, I got maybe $400 and then...nada. Zip. Zero.

I emailed my bank to no avail.

I tried to phone, but neither my hotel phone nor my cellie would get through (Damn you, Virgin!)

So I landed in Cuba with maybe a quarter of the funds I needed to have a really good time, or even to eat three meals daily.

I told myself that this was a good time to lose weight.

I shared a taxi from the airport into Havana with a couple of Ukrainian dudes and immediately paid the host of my casa particular for the stay. Alex was extremely kind, allowing me the use of his computer so I wouldn't have to pay a hotel at their business center for internet access--I was trying desperately to make sure I'd have enough money for the next phase of my journey, which was Isla Mujeres.

Nevertheless, I still had a good time researching my story for the Naughty 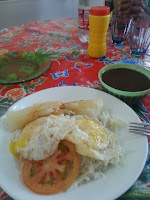 Literati, One Hot Havana Night. I couldn't afford taxis, so I walked all over Havana Vieja, the tourist quarter, where I set my story. A friendly expat showed me a lunchroom where I could eat a huge meal for $1-2--so that's where I ate. It was pretty good food--a protein (eggs, chicken or meat) with a little salad, plus rice and beans--typical Cuban fare. I even had enough left over so I could go to a bar and get a drink while listening to the local music every night.


Havana was great, but it's nevertheless a tourist trap. It's just that the tourists aren't Americans. Lots of Europeans, especially Italians, and a number of Japanese.

I learned a lot. Most people seemed pretty contented. As for the economic system, while I heard someone complain that they work really hard for little money, I saw only one or two people who seemed to be badly off. Everyone else looked happy and well-fed, though not obese. I saw many of the famous classic American cars, but I saw a lot of new cars as well--Peugeots and Kias, Hyundais and even Benzes. I just didn't see newer American cars. That's because Cuba isn't isolated at all. It's just that we don't have an economic relationship with them. Other countries have been trading with Cuba quite happily.

Still, I can't say that the place is well run. The Castros seem to be good at getting and keeping power, and not so hot at using it. Many of the old, beautiful 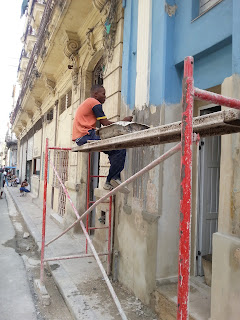 buildings are crumbling, though I must say that they're making an effort to resurrect them. Many streets are dug up as improvements are being made. And this brings me to the title of this post.


So why is Tuesday morning the best time to arrive in Havana?

Because the trash is picked up Monday night, at least in the part of Havana where I stayed. Until then, it's thrown into giant Dumpsters by the locals. As you can imagine, the garbage gets pretty ripe in the tropical heat.

But Havana smells great on a Tuesday morning.

And here's a snippet of the story I wrote after visiting Havana. It's in Naughty Spice, the NL's latest!

Havana, 1958... On the eve of the revolution, journalist Ellie Wheeler dreams of the biggest story of her life. Two hot men make all her dreams come true—even ones she didn’t know she had.

Guess what? It includes a sexy M/F/M ménage.

Here’s an excerpt to sharpen your appetite:

The big doors closed behind her with a click.

She turned to see Almonte leaning against them, eyeing her with predatory interest gleaming in his dark eyes. Her belly fluttered. She’d exposed corrupt union bosses and crooked politicians, but this was really the first time she’d played with the big boys. Organized crime was nothing to treat casually, and she’d thought she was ready.

He stalked toward her. “Take that stupid thing off. It fools no one.” He tugged at her wig.

“Ow!” She put a hand up to her head to stop him. “My hair clashes dreadfully with my dress.”

“Then take off your dress.” He slid one long, dark finger along the curve of her neck to her shoulder. The contact tingled in a way she hadn’t before experienced. “Strip for me.”

She turned to him, her eyes wide.

He laughed. “I thought you said anything for the story. You knew what would happen when you came up here. Shall we not pretend?”

She swallowed hard. How had she gotten into this predicament?

By being Hell on Wheels. Everyone thought she was brassy and bold. They had no idea she was still a virgin.

Like what you read?
Here’s where you can score a copy: