Win a copy of This Time When We Touch 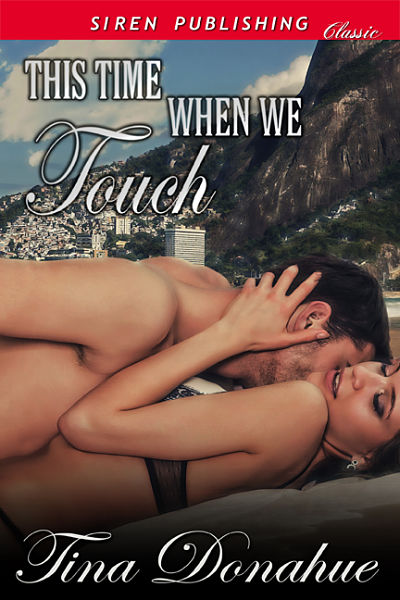 Rules: Simply leave your name and email addy in the comments section AT THIS LINK: http://tinadonahuebooks.blogspot.com/p/monthly-hot-guy-contest.html and you're entered in my April contest! WINNER CHOSEN AT RANDOM.
Duration: Contest begins April 1 and runs through April 29 – Winner announced April 30. 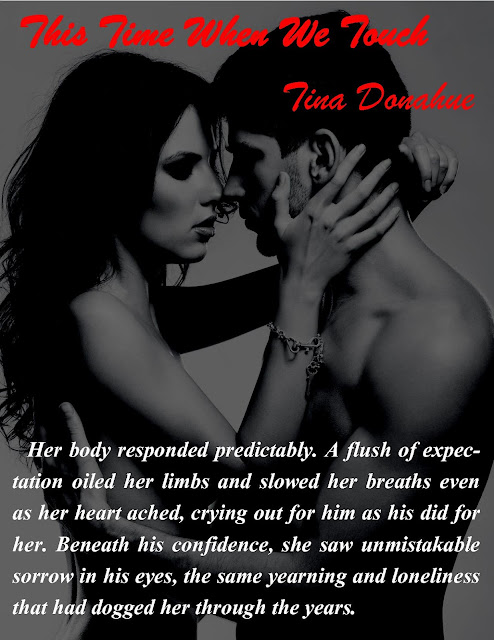 Fate has cruelly torn them apart through the centuries…
Endless desire and unparalleled love will bring them together a final time.
Through numerous reincarnations, Jade Jacome has adored one man. His love for her has repeatedly led to her murder, always on the same day and time. Jade’s scientific research proves this is their final rebirth, her last chance to outwit destiny and fulfill their passion. Against a backdrop of Brazil’s lushly decadent Carnaval, Jade has forty-eight hours to meet and tempt her lover, now known as Patrick Kane, then break fate’s deadly pattern.
Irresistibly drawn to Rio, Patrick senses Jade’s yearning that matches his. Seeing her again, time stops. Though they’ve never met in this life, he feels their connection, and that she’s in danger because of him. Baffled and unsettled, Patrick resists his attraction to Jade to keep her safe.
In a contest of wills and shameless seduction, Jade must gamble all, even her life, before the anniversary of their first separation or risk losing Patrick forever.
A Siren Erotic Romance 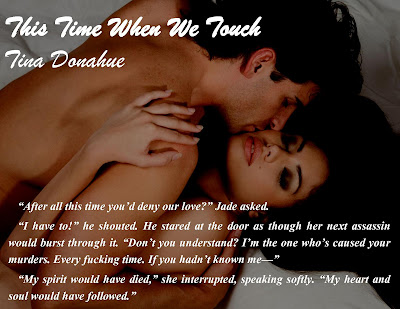 Excerpt:
Jade regarded the young women who’d spoken to Patrick. The one on the right snatched his tee and pressed it to her nose. Her girlfriends reacted with surprise, dismay, jealousy, then all of them fell back to their towels, laughing loudly.
Their happiness touched Jade. She wanted the same for herself and Patrick. Turning to the sea, she spotted him. His strong, solid strokes took him farther from shore and her.
Jade followed for a few feet then stopped, warning herself against joining Patrick, telling him she was the woman he’d searched for when he’d moved down the beach. Her confession might flood him with too many painful memories, which would make her seduction that much more difficult.
When he saw her again, she needed him to recall a warm summer day in 1510, moments after he’d finished his swim. He’d stood in a shallow part of the stream then, the water reaching just above his knees. Beads of moisture dripped from his eyebrows, stubble, and long dark lashes. Sun drizzled through thick stands of cork and olive trees, dappling his broad shoulders with flecks of golden light. With his head lowered, he’d scooped water then flung it beneath his arms.
Secretly, she’d watched him, as she had for weeks, ever since he’d arrived at her papá’s castle to tutor her younger brothers.
His tall, strong body had intrigued her from the start, along with his educated voice, sculpted features, and bearing with his charges.
Unlike her papá’s other servants, he didn’t defer to her brothers, indulging their every whim. With a firm but fair hand, he’d schooled them in advanced mathematics, Latin, Greek, science, horsemanship, and other physical pursuits. At those times, he’d worn only a linen shirt and hose as he ran and played with them. Grinning broadly, he’d ruffled her brothers’ dark hair when they performed to his satisfaction.
She began to imagine his smile directed at her, his touch belonging to no one else.
At night, she dreamt of him. During the day, she couldn’t think of anything else, consumed with everything he did. Where he slept, what he ate, how he enjoyed his few moments of freedom from her brothers and her papá’s demands.
Clearly, he enjoyed bathing in the stream, rather than the iron tub in the castle. As though he preferred to be outdoors because it allowed him to be alone. Or so he thought.
Water poured through his fingers as he finally sensed her. His hand remained suspended in air as he forgot to bring it to his chest.
Slowly, as though uncertain at what he might see, he’d lifted his face and stared at the hem of her yellow gown. The insistent breeze had pulled the linen away from her legs and around the tree trunk where she’d been hiding.
A warning registered in her mind, telling her to yank the garment back, then turn and run, not stopping until she reached the chapel. There, god would expect her to feel badly for what she’d witnessed.
Carnal desire proved more powerful and compelling than eternal damnation, trapping her where she stood. With her palms on the stout ancient tree, she leaned to the left, knowing he’d see her face, not caring if he did. All she could do was drink in his powerful male form—his flat nipples, as richly brown as the earth, the dark tufts of hair beneath his arms, the silky strands swirling around his navel then trickling to his groin.
Flushed with embarrassment, fevered with need, she stared at his male organ, captivated as it lengthened and hardened before her eyes, the skin growing dusky, the head rounded and so plump his skin seemed in danger of splitting.
When she finally glanced up, she forgot to breathe. In his dark eyes, she saw desire to match her own. The promise of what life should be, not what her papá had planned for her with the count. A man she could barely stand.
Trembling with excitement, she stepped from behind the trunk and faced him.
Beneath his lust, she saw how bewildered he was. He had no idea who she might be or where she belonged. Although he’d lived at her papá’s castle for weeks, there was no reason for her father to have introduced them. He was a mere tutor, she even less. A female relegated to the shadows, ordered to be quiet and meek until her nuptials.
Undeniable need drew her closer to him, a sense of destiny singing in her blood.