Revenge is Sweet - a Blog by Romance Author Marianne Stephens 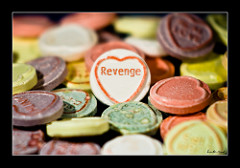 RAISE your hand if you've never considered a way to exact revenge and "get even" with someone. If your hand is up, you're either very forgetful, have a selective memory, going through a "senior moment", and lightning will soon strike! It's part of human nature to feel mad and want to even the score...even for a "saint" like me!

Dating, romance...and being dumped or used. All stuff we go through in the game of love. Initially, you feel hurt and are embarrassed by questions like "Where is ...?" asked by friends and family. You may make excuses, tell fibs, change the subject so you don't have to admit a breakup has occurred.

Most times, you go on and finally tell people your version of the story. Doesn't matter if it's exactly true, but its something you'll stick to and feel better about yourself for saying. You can analyze and justify it in your head, and that's how you cope.

More power to you. Getting rid of a loser, even one you thought you loved, is better than being with one. I'll now tell you my story of revenge against an ex-boyfriend, the first and only time I ever "got even".

If you believe that, I have a bridge in New York I'd like to sell to you!

I dated Ron in college for months. I knew he was on academic probation but he didn't seem to be able to pull up his grades. Ron finally got word that he'd flunk out if he didn't leave, so he quit school. We were to spend his last weekend at the college together before he headed home and either went into the military or found a job.

We had plans; lots of couples stuff to do starting on a Friday night. He called me an hour before coming over to my dorm to let me know that an "old ex-girlfriend" surprised him by coming from a nearby college to say goodbye so if I didn't mind, he'd see her that night and see me the next day.

What could I say? Annoyed but trying to be reasonable, I agreed. We'd have all day Saturday to spend together. And, we'd spend Sunday morning before his bus left since he had to vacate the dorm that day.

Saturday morning came. He called again. His "ex" was still there, and wouldn't leave until late that night. Would I mind waiting to see him until Sunday?

Hell, yes, I minded. I remained calm as wheels in my head started turning. Ron apparently was dumping me for his "ex" and I didn't matter to him. Crushed at first, anger swiftly took its place and the word "revenge" planted itself in my brain. I had to do something to "get even".

Once again...but this time through gritted teeth...I agreed to his suggestion. But I was already formulating a plan in my head, one that would get the message through to his "male-ego" brain. Maybe he'd take note and not pull this type of "dumping" act on another female.

I never went to meet him. He called at 10:15 and I said I was on my way. He called again at 10:30 and I told him the same thing. His final call came at 10:45. It was too late for him to catch the morning bus, but now he'd spend the rest of Sunday with me and take the 11:00pm bus. Since he had to vacate the dorm at noon, he figured I'd let him leave his stuff in my dorm room and help him carry it to the bus stop that night.

Now was my turn. I knew I'd delayed him from taking the earlier bus. I knew he'd have to wait 12 hours for the next bus. I knew he'd have nowhere to store his things. With a nonchalant tone in my voice, I told him I would be busy the rest of the day but wished him a happy life and promptly hung up. I had visions of him lugging his stuff to the bus stop and sitting there all day...and that was my act of revenge. I had to quell the curious streak urging me to go "peek" and see if he waited there hopefully full of regret. 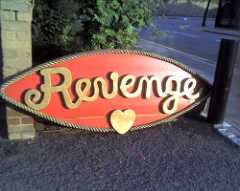 That's my version...and I'm sticking to it! So, what's your tale of revenge or "getting even"?

Email ThisBlogThis!Share to TwitterShare to FacebookShare to Pinterest
Labels: getting even, Marianne Stephens, revenge, romance author