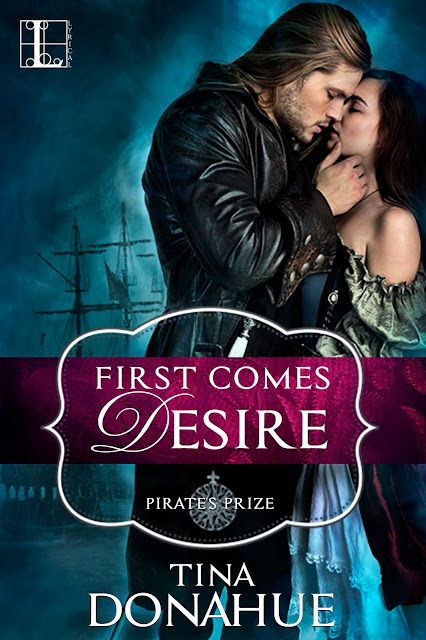 On a lush, secluded island, one passionate adventure leads to another….

Diana Fletcher means business. The beautiful, innocent, reverend’s daughter has traveled all the way to a tropical island off Madagascar on a mission: To find her brother—and to punish the man who drove him to a life of piracy. But when she comes face to face with the enemy in question, the handsome, powerfully seductive man is not at all what Diana expected…

Tristan Kent never intended to harm Diana’s brother. A man of humble origins, Tristan claims he tried to save him from another ruthless captain. Diana is desperate to believe he is telling the truth…and that the intoxicating desire that escalates between them is true as well. But can she trust him? Or is Tristan’s story—and his heart—nothing more than fool’s gold? Amid the haze of sensual delights and soaring ecstasy Tristan has in store for her, all will be revealed…

Women hadn’t been born to yield. Women could yield. They might even enjoy doing so, but only with the right man. One they desired. First came desire. Respect and love followed.

Diana could only deliver her heart to a man like that.

Even if Tristan wasn’t facing the gallows, he wasn’t the one she needed. His skin was warm against hers but what of it. He was handsome as the devil, yet there was the rub, because he was also brutal, violent, taking what he wanted. His mouth on hers was something she refused to consider, though she could hardly forget how he’d spoken calmly when she’d railed. She insulted and he smiled. He claimed she wanted the same as him. Diana did not. She wanted to be home. She needed to be free.

Her eyes flew open. A sound or voice had awakened her. Reclined on her side, she faced away from the door. An oil lamp had gone out, telling her she’d slept far too long, recklessly too.

Diana rolled onto her back but didn’t check his mattress, knowing he wasn’t there or in the cabin.

Tristan was. His long legs, muscular calves, and thighs blocked her view of the door. He’d placed his precious book on the table. The volume was safe. She was not.

Before she could push to a sitting position or think to fight, he straddled her, his hands circling her wrists, holding her arms to each side. His touch didn’t harm, at least not yet.

He offered a smile.

How dare he be so smug. “Release me at once.”

He tightened his grip slightly and studied her mouth, then her eyes. “Violet.” Awe flooded his face. “I wondered about your eye color but never expected this.”

She pushed and writhed but did no good against his strength. Breathless, she stopped. “What have you done with Peter?”

She rammed her thighs into him.

He held her more firmly. “Stop that.”

“Not until you tell me what you’ve done with my brother.” She slammed into him.

He scooted down and trapped her legs. “Peter’s on the main deck with the other men.”

“He’s a child and proved it by helping you escape.”

“This wasn’t his doing, and you’ve no reason to fear for his safety. I have James, my quartermaster, looking after him.”

“A bloody pirate, you mean. The same as you. Perhaps even worse than you.”

“No. James is a good man.” A haunted look touched Tristan’s features before he shook off whatever had troubled him and became casual. “He saved my life. He’ll take great care to watch your brother.”

She wanted to retort but couldn’t reconcile her indignation with Tristan’s previous anguish and the mean scratches she’d left on his cheek. Dried blood had gone black, the surrounding skin swollen and red. “What do you mean he saved your life?”

“Just that, ask no more for I’ll give you no other answer.”

“The only thing I want from you is my freedom.”

He stroked her wrists. “You want the same as me.”

She pushed against him, straining with the effort.

He tightened his grip, proving she wasn’t a match for his strength. If he chose to take her now, she’d have no choice except to allow him what he willed.

She didn’t beg. Wouldn’t. Not to him or any man, including Bishop. They could conquer her body but not her spirit, never her heart. Reconciled to her fate, she grew limp as she could, pulse racing. “Take what you’ve come for and be quick about it.”