Over the years my day job has involved a lot of travel, not just inside the state, or even in the United States, but around the world.
Now, before you start jealously sticking pins in a wax Berengaria doll, please remember that I went to these places for WORK. Mostly what I saw was a lot of airports, and far too many conference rooms, which all look pretty much the same. Sometimes I couldn’t even remember where I was because the surroundings were so similar to everywhere else. Think McDonalds. The McDonalds in Cleveland looks the same as the McDonalds in Akron, looks the same as the McDonalds in Baltimore, and in London, Paris, Nairobi—I’m sure you get the picture.
But every now and then I managed to carve out a few days of sightseeing between business meetings and to actually enjoy visiting the places where I was.
Like many authors, I’m always thinking “what if?” One day I thought, “What if a travel company sent people around the world looking for love? Where would they go?”
The characters that immediately arrived in my head clamoring for their happy ending were all male. I write MM, FF, ménage, and MF so I’m used to writing the HEA the characters demand, but I hadn’t actually pictured a Gay Travel agency, until I began to think how awesome that might be. And what problems gay lovers might have finding romance around the world.
It was hard to narrow down my favorite destinations to just four very different places, all extremely romantic. But hey, that leaves open the possibility that one day in the future, Tyler Robbins might decide to send out more men in search of their own romance. 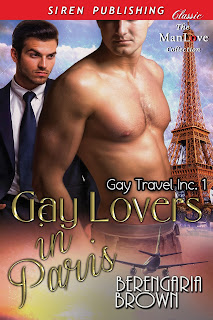 Blurb: Sean Zagorc’s boss, Tyler Robbins the owner of Gay Travel Inc., sends him to Paris to write about gay romance in the City of Lovers. Tyler expects him to send multiple tweets every day about romantic scenery, romantic venues, romantic meals, romantic everything. How can Sean do that without a partner?
Elementary school teacher Antoine Dupre nursed both his elderly parents until they passed. Now he has a week’s vacation in Paris before selling the family home and finding a job. He’s on a very strict budget, and plans to spend most of his time in the Louvre looking at the exhibits.
Fate brings them together and Antoine is attracted to the American in the business suit. He agrees to help Sean take a few pictures, maybe spend a day together visiting somewhere suitable for Sean’s work like the Eiffel Tower. That should be romantic enough for Tyler, shouldn't it? 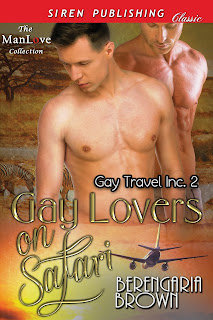 Gay Travel Inc. Book 2: Gay Lovers on Safari (MM) by Berengaria Brown
Tyler Robbins, the owner of Gay Travel Inc., decides to send four of his best—and single—travel agents to different continents to report on romantic travel venues. He sends Preston Bennetts to Kenya on a safari. Preston is excited by the idea until he discovers that homosexuality is illegal in Kenya. How is he supposed to complete his assignment? Fortunately he meets Austin and Ryan Holder. Austin has always wanted to visit Africa and Ryan has accompanied him because the old man is getting frail. But they’re both great company and Ryan agrees to help Preston.
Their constant search for romantic photo opportunities has Preston and Ryan thinking lustful thoughts about each other. That absolutely can’t happen in Kenya though. Any sign of gay activity could have them sent to jail.
Will taking pictures of the Big Five game animals satisfy Tyler and prevent Preston and Ryan from touching each other? 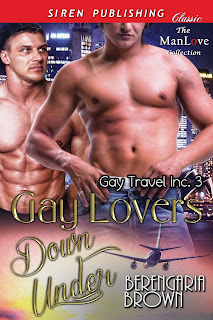 Blurb: Tyler Robbins, the owner of Gay Travel Inc., decides to send four of his best—and single—travel agents to different continents to report on romantic travel venues there. Quentin Wood is sent to Australia but after twenty-two hours of flights and a fourteen hour time zone change he’s exhausted. Add to that he can’t understand a word of the mangled English his guide, Justin Cook, uses.
Juz likes the look of his sexy new client, if he’d just relax a little. Juz is determined to show the man he calls Woody all the sights, including some more intimate personal ones.
Quentin can’t get his head around the idea of driving two thousand miles in two days to visit some place where the temperature sits above one hundred degrees for six months straight. Tyler has sent him to Hell. But if this is Hell, that means Justin’s the devil, and he’s a mighty attractive devil. 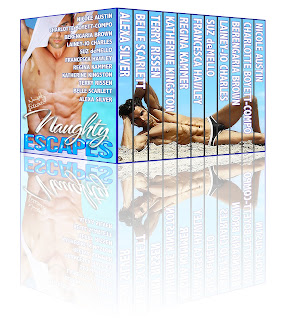 Posted by Berengaria Brown at 11:35 PM