BURNING ASH by N.J. Walters is out today. This is the third book in the Forgotten Brotherhood series. 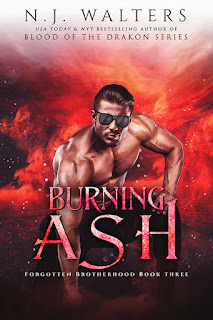 No one is more surprised than Asher, one of the oldest vampires on Earth, that he's attracted to vamp hunter Jo Radcliffe. She's smart, a talented slayer, and she's gorgeous. Something about her pulls at him, like no one ever has before. For a man, whose name strikes fear in everyone––this is something new and intriguing. And quite possibly deadly, if she discovers his secret.

Jo has two things in common with the handsome Asher––they are both slayers and someone is messing with them in a very-much-trying-to-kill-them way. She's not so happy about joining forces with a dude she doesn't know. But he's sexy as hell and really good at his job as one of the Forgotten Brotherhood, whose business it is to execute misbehaving paranormals.

She knows she's bait in a larger plot to harm Asher and the Brotherhood. And there is nothing he won't do, no line he won't cross, to keep her safe––which may be the weakness that destroys them both.

He stuck his big foot in the doorway, to keep her from slamming it in his face. “I’m sorry if I scared you.”

She gave a snort of derision as she tossed the bag on the sofa and faced him, defiance in every line of her body. “Takes more than that to scare me. Well, you coming? You’re no vampire. Not like you need an invitation.”

If she only knew.