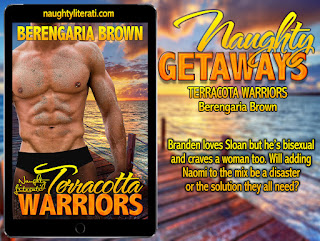 How to make Terracotta Baked Potatoes
1. Wash the potatoes carefully, trying not to damage the skin which must remain on, and place them in a casserole.
2. Strip the rosemary needles off the sprigs and add them to the potatoes. Sprinkle the lemon juice, water and salt over, put the lid on and shake the pot well.
3. Place in a preheated oven and bake for 60 minutes. Test the potatoes at the end of the cooking time, they may need a few minutes more. Serve hot.

Everyone was well aware of Mr. Verwendahl's almost-addiction to coffee. But no one would ever tease him.
He was much too good a tipper.
Branden noticed all this byplay as he was led to his reserved table. I suppose I should cut back on my caffeine intake. But not today.
Sloan arrived at the same time as Branden's coffee, so the server just nodded, raised an eyebrow, and said, "And one for you too, sir?"
"Long black, please."
Branden let his hand rest lightly on Sloan's. The man's hand felt warm and strong and wonderful to his jittery nerves. "If you don't like her, if you don't want this, no pressure. I love you very much. Want you. Want us," he said quietly.
"Relax, I understand. I can't be happy if you aren't happy. I get that you need both. Shh now."
Branden picked up his coffee and sipped it, loving the soothing taste of it sliding down his throat, his gaze moving to the doorway. There she stood. Five foot eight and one hundred percent woman with lush curves -- generous breasts, ample hips and a nicely rounded ass.
God, she made his dick harder than a spike. No other woman ever had that effect on him. He put down his cup to signal her, but she'd already seen him and was walking toward them, her blonde hair bobbing on her shoulders, her gray eyes dark and worried.

“Terracotta Warriors” Blurb
Naomi has a casual sex-buddy relationship with Branden, a bisexual man. When she loses her job Branden offers her a short-term position in the Museum of which he is a director, but more than that, he wonders if she could be the solution to his sexual problem. He and Sloan are very happy together, but Brand needs the softness of a woman as well as the harsher, more animal mating of two males together.
Sloan and Naomi join Branden on a business trip to Xi'an. Will adding Naomi to the mix be a disaster -- or the solution to all their needs? 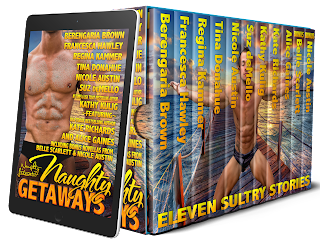 Naomi called her boss a f**ing idiot. In the lunchroom. Oooops. A Story Excerpt from “Terracotta Warriors”.

"Only a f**ing asshole like Shannon could imagine for one moment that we'd be able to do a brand new test without spending several days running trials and recalibrating the equipment," said Naomi to her best friend Alison in the lunchroom at the scientific laboratory where they both worked.

The usual noisy chatter of the lunchroom had dropped to deathly silence as Naomi spoke, and now that hush was broken by multiple gasps, snorts and sniggers. Alison's mouth was hanging wide open, her eyes filled with horror.

Alison rolled her eyes and worked her jaw until it finally closed.

"Would you care to retract that comment, Miss Hunter?"

"Oh shit!" Naomi spun around and there in the doorway was Shannon himself. Mr. Shannon Charles, Head of the Organic Chemistry Division of PVT Chemical Industries -- and everyone in the room's boss.

Her head spun, her cheeks blanched and her gut churned, but Naomi knew what she'd said was correct.

Incredibly stupid to say at work, but nonetheless accurate.

Pulling her shoulders back and her spine ramrod straight, Naomi took a deep breath, and then very deliberately threw her job away. "No, sir. I will not retract what I said. As you know perfectly well, I am one of only three people in the state qualified to sign off on the tests we do, and these new samples will not be accurate enough to pass the annual audit unless we spend several days doing trial tests and calibrating the machines properly. Our reputation for accuracy will be in the toilet." Like my job.

Shannon pulled his cell phone from his blazer pocket and clicked through his address book. "Julie, make up Miss Hunter's pay sheet right now. She's leaving us." He clicked again and said, "John, get to the lunchroom now."

No one in the room moved in the brief few minutes it took for John from Security to arrive. "Yes sir?" His hand was on his weapon as if he expected to have to break up a fight or apprehend a criminal.

"Miss Hunter is leaving us. Escort her to her desk and make sure she takes only her own possessions, then take her to Julie's office to get a printout of her salary entitlements and sign for them. That is all."

A few more gasps came from around the room, but Naomi marched through the door, head up, looking neither to the right nor the left as she set a fast pace to the Organic Chemistry Laboratory where her little office was. There she collected a large, empty cardboard box and packed her things by simply upending her desk drawers into the box, dropping the few personal items from the top of her desk into it, then balancing her potted plant and purse on the top of everything else.

Anger was burning through her at her own insanity at voicing the comment, and at the rightness of it. She snagged her jacket off the back of her chair, remembered to collect her log book, lab coat and safety goggles from the lab itself, then nodded to John who had stood well back from her, totally silent.

"Is that it, Naomi? None of your stuff in the bathroom or on anyone else's desk?" he asked carefully.

"No. I could delete my personal files off the computer but Shannon might say I took proprietary information. This way you are witness that I didn't touch it and I don't care if anyone reads my emails anyway," she replied, shrugging. Besides, her personal files were on her flash drive so it wasn't a big deal.

John nodded. "I'll carry the box for you. You take the plant."

When they reached Julie's office the paperwork was all waiting for her sign. Julie's face was alive with curiosity but Naomi simply said, "Goodbye" and "Thank you". She knew Julie would be on the phone to Alison as soon as she'd left.

John walked her to her car, loaded the box into the trunk for her, and she could see him still standing there watching her leave, as she exited the gate and turned onto the highway. She drove for a couple of miles toward her home, then pulled off into a side road, switched off the engine, folded her arms across the steering wheel, and burst into shattering sobs as the anger and tension exploded from her body. 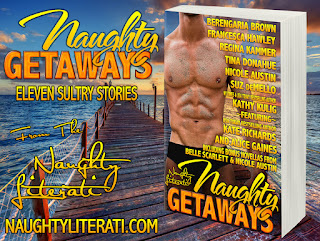