Two quick historical romance reads to get you hot and bothered!

Imperial Warriors: Two Scorching Tales of the Roman Empire is my latest release and it's on sale for only 99 cents!

This mini-anthology includes previously published stories now available together for the first time. "The Promise of Memory" was published in Hot Highlanders and Wild Warriors, and "Protecting Her" was published in Conquests: An Anthology of Smoldering Viking Romance. It's my very first anthology of my own stories.

The mini-anthology is only available as an ebook (it's too short to be a paperback) and I've gone wide with distribution. All buy links are below:
Amazon USA
Amazon UK
Amazon Canada
Amazon Australia
All Romance eBooks
Barnes & Noble/Nook
iBooks (iTunes)
Kobo
Inktera/Page Foundry

Ancient Warriors...
Muscles flexing under sun-burnished skin as thick arms wield swords, battle axes, or bow and arrow. Brawny, fierce, and intensely loyal to their cause, king, or god. Alpha heroes romanticized through the lens of history.

...of the Roman Empire
Legions marching under the banner of Rome for centuries, conquering the Mediterranean and beyond, from Britannia in the West to Anatolia in the East.

The Promise of Memory
A slave in Rome’s imperial palace finds freedom in her fantasies of a knight in Trajan’s guard—a warrior who evokes memories of a long lost love.

Protecting Her
A Byzantine noblewoman seeking refuge in a monastery loses her heart to an invader when Constantinople is sacked by the Viking Rus. 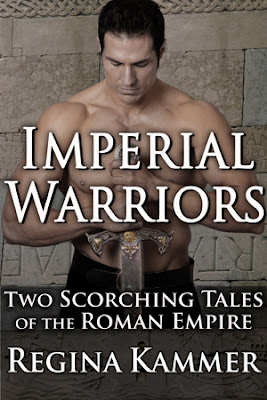 Don't you just love the cover? The model also appears on the covers of The General’s Wife: An American Revolutionary Tale and the 2013 edition of The Pleasure Device.