The first in the series is a romantic short story. The others are full-length novels.

I've always loved the Medieval period, particularly in England. It was a fluid, dynamic time, a romantic time when knights and ladies ruled and the ideal of courtly love flourished but was always rubbing against the harsh realities of daily life.

All of these stories were formerly published by a now-defunct epublisher.  I’ve re-edited them to take out some gratuitous language and scenes, and to improve the grammar.

The first one, Daring Passion, a short story, is now available for pre-order at Amazon and elsewhere. It will release on March 1st. 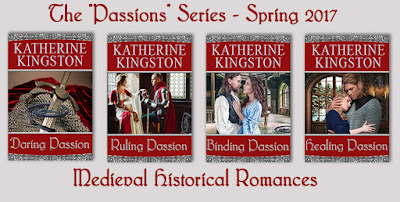 Blurb for Daring Passion: What’s a lady to do when her father and the suitor she favors can’t get together on the terms of the dowry, and neither is willing to give an inch? Take matters into her own hands, of course. Even if it means taking a risk with her intended, her reputation, and her future…
Posted by Kate Kingston at 1:00 AM